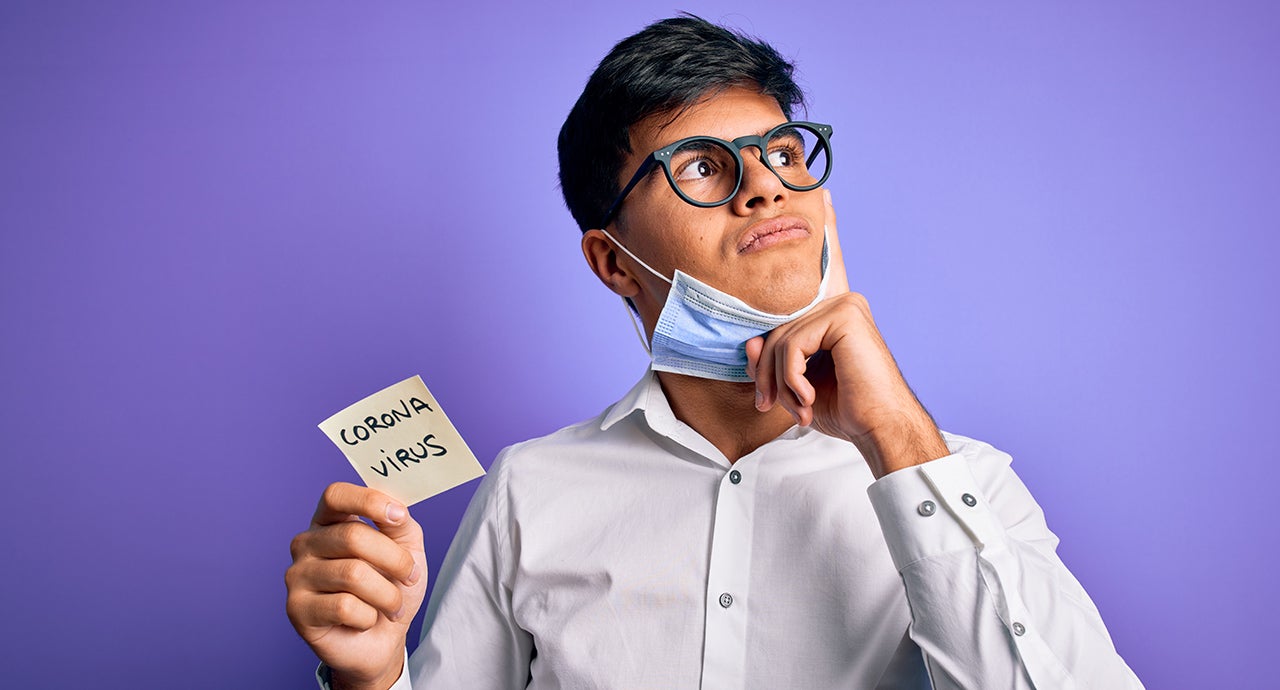 By February 2022, ten of the thirteen countries in the Americas that had not reached the WHO’s 2021 COVID-19 vaccination goals were in the Caribbean.[1] Governments and multilateral organizations are trying their best to remedy structural barriers to increasing vaccination coverage by, for example, opening more vaccination centers and providing vaccines to those countries.[2] However, there are many behavioral reasons why people in the Caribbean are vaccine hesitant. These reasons are complex and context-specific,[3] as they intersect with cultural elements like religion and a strong belief in natural remedies. The current reality is that institutions have fallen short of their goal of increasing vaccination against COVID-19 by only focusing on structural barriers and, therefore, failing to tackle vaccine hesitancy in the population.

In this context, more knowledge is needed to design public health communications aligned with local values and beliefs to increase message effectiveness in Caribbean countries. Despite being an enormous challenge, the project described in this brief attempted to create a communications campaign to battle vaccine hesitancy in the Caribbean. We need more experiments like this to better tailor communications for the benefit of vulnerable people in the region.

This study aimed to test the effectiveness of a public health communications message designed with behavioral science insights on vaccination acceptance. The countries included in this project were those of the Caribbean Countries Department at the IDB: The Bahamas, Barbados, Guyana, Jamaica, Suriname, and Trinidad and Tobago.

With the help of the communication agency “Pacifico” and the Knowledge Information and Communications department at the IDB, the Behavioral Economics Group aimed to recruit people who were unsure about the vaccine and experienced what is called in behavioral science an “intention-action gap.” People who fall under the intention-action gap have the intention to behave a certain way (in this case, getting vaccinated). Still, the context, human biases, or heuristics work against that intention, so they do not perform the intended action.

[1] PAHO (2022, February 23). “Low vaccination rates in the Caribbean must be urgently addressed to stop the spread of COVID-19 says PAHO Director”. Retrieved on the web on June 09, 2022, from  https://www.paho.org/en/news/23-2-2022-low-vaccination-rates-caribbean-must-be-urgently-addressed-stop-spread-covid-19-says

[2] UNICEF (2021, July 14). “Statement on the arrival of the first batch of COVID-19 vaccines in Haiti”. Retrieved on the web on June 09, 2022, from https://www.unicef.org/press-releases/statement-arrival-first-batch-covid-19-vaccines-haiti

Social norms: The unwritten rules governing behavior within a society. A distinction is drawn between descriptive norms, which describe how individuals tend to behave (for example, “most people arrive on time”), and prescriptive norms, which establish what is considered acceptable or desired behavior, independent of how individuals actually behave (for example, “please arrive on time”). In this case, we hypothesized that some people were putting off getting vaccinated because, since most are unvaccinated in the Caribbean, they do not feel that getting vaccinated is a social norm they need to follow.

Lack of information: People may lack relevant information about COVID-19 vaccines, for instance, because that information is scarce, difficult to obtain, or hard to understand. Also, trustworthy vaccine details might be difficult to get in a world of misinformation.

Loss aversion: This refers to the idea that a loss causes an amount of distress greater than the happiness caused by a gain of the same size when two options that involve risk and uncertainty are compared. Therefore, people are more willing to take risks to avoid a loss. In this case, we hypothesized that people are more inclined to take the chance of getting COVID-19 without a vaccine because they fear losing their good health due to the side effects of the vaccine.

Procrastination is simply the act of delaying something. We hypothesized that some people who have the intention of getting vaccinated might wait until vaccines become mandatory to do so.

Autonomy/agency. Autonomy enacts a self-reflective way of being centered on the exploration and reflective awareness of personal desires, wishes, and intentions. In this project, we put autonomy at the center of the design by giving participants the opportunity to choose the type of information they wanted to receive about COVID-19 vaccines.

Priming: Priming is a phenomenon in which exposure to one stimulus influences how a person responds to a subsequent stimulus. These stimuli are often conceptually related to words or images. For example, a moment after a person sees the word doctor, he/she will be faster to recognize the word “nurse” than an unrelated word because medical concepts are closely associated in her mind. In this intervention, we used a series of questions throughout the survey aimed at reminding participants of different elements, such as altruism, trustworthy people and institutions, and life before the pandemic.

Cognitive dissonance. Cognitive dissonance is the mental conflict that occurs when a person's behaviors and beliefs do not align. It may also happen when a person holds two beliefs contradicting one another. We used this principle to remind people of life without the virus. We also included an emotional video that activates the sense of loss of life by comparing current life to life before the pandemic. This video implies that it is contradictory to think that vaccines are helping us get back to normal and still not get vaccinated.

Altruism is the belief or practice of disinterested and selfless concern for the well-being of others. We used this principle in two videos. One explains how a person changed her mind and got vaccinated when she understood that getting vaccinated helps others. The other is a very emotional video of a woman who has made it her goal in life to help others get vaccinated. This video ends with a question that aims to create cognitive dissonance by implying that a person is being selfish if they have a vaccine available to them while they have decided not to get vaccinated.

Messenger effect. Refers to a change in the level of influence a message has because of who presents it. We provided information from trusted sources like the Pan American Health Organization, Yale School of Medicine, UC Davis Health, and the Stanford Center for Health Education, among others. With videos from these sources, we aimed to debunk misconceptions about the side effects, effectiveness, and efficacy of the COVID-19 vaccine. Additionally, we provided information about activities that require vaccination, like travel to the United States.

Recruitment of participants was carried out through the social media platforms of Facebook, LinkedIn, and Twitter, with a series of ads released from IDB official accounts. The communications agency Pacifico created the recruitment ads and the image of the intervention and selected the videos used in the intervention. In conjunction with Pacifico, the Communications Department of the IDB and the Behavioral Economics Group chose the ads' target audience. The ads aimed to attract people 18 and older who intended to get vaccinated but had not yet done so. The social media campaign lasted three weeks.

The ads were linked to a survey developed using “Typeform.com,” which hosted our online communications intervention. After clicking on the ad, the subjects answered four demographic questions on country of origin, gender, and education, and two questions about their vaccination status. In the initial design, if a person fell under the category of unvaccinated or partially vaccinated (0 or 1 COVID-19 vaccine), they became part of the experiment and were later assigned to the treatment or the control group. If a person was fully vaccinated (2 or 3 vaccines), they were not initially considered part of the experiment and were not randomized into control or treatment.[1] However, the design was quickly changed to include all individuals in the experiment regardless of their vaccination status due to the high percentage of people who were reporting vaccination (around 85%) which seemed either to be a dishonest answer or to reflect a strong selection bias of our sample. Considering that immunity from the current vaccines is waning, and currently vaccinated people will probably need to get boosted in the future against COVID-19, we thought this design change was an acceptable adaptation.

Randomization was carried out using the last demographic question regarding the year the subject was born (which followed the question regarding vaccination status). With a previously stratified randomization that allowed us to assign groups into control and treatment, a subject was assigned to their experimental group based on the year they were born. The strata were: 18-24 years (2004-1998); 25-39 years (1997-1983); 40-54 years (1982-1968); 55-64 years (1967-1958); and 65-80 years (1957-1942). For each stratum, half of the years were randomly assigned to the treatment and the other half to the control. Data on participants less than 18 years of age were dropped from the analysis.

The only difference between the surveys of the control and treatment groups was the order in which the outcome variable (willingness to get a vaccine) appeared. In particular, the control group answered this question before seeing the communications content, and the treatment group responded to this question after seeing the communications content.

If a vaccine was available for you today, would you agree to be vaccinated?

For each subject, the specific content of the survey was based on the question, “What is the main reason you are unsure about getting vaccinated against COVID-19?” Participants were given the response options seen in Table 1.

Table 1. Response options and their corresponding barrier and treatment

Participants were presented with communication content addressing the specific barrier of the main reason for vaccine hesitancy selected. We hypothesized that people would benefit from tailoring public health communications and that freedom to choose would increase trust in the information presented. However, we did not measure trust. Each of the paths derived from the response options of the vaccine hesitancy question represented a treatment group.

The evaluation of the impact of public health communications against a control group was the minimum research goal of this RCT. However, we were able to analyze the impact of each specific treatment against each control sub-group (derived by choosing a reason for hesitancy after already answering the outcome variable). To test whether the communications content affects vaccine acceptance, we ran simple OLS regressions. We expected a statistically significant difference between COVID-19 vaccination acceptance in the treatment groups compared to the control group. We expected the treatment means to be higher than the control means.

From ex post interviews conducted to understand the results, we learned that people would like to hear from their community how it feels to have COVID-19 and be vaccinated. They would also like more information from official national sources about how the vaccines are helping protect individuals and lessen the dangers of the pandemic locally. Even though this project covered these aspects, it used non-local sources.

[1] They were asked the year in which they were born before being shown a video about becoming a COVID-19 vaccine advocate and taken to the end of the survey.

[2] This treatment consisted of a mix of priming questions aimed to remind the subject about some regulations that require vaccination to travel or work. There were also a set of videos that informed subjects of these policies.

Results indicate that the public health communication campaign did not have an impact on willingness to get vaccinated. Most of the impact coefficients were not statistically significant and showed a negative sign, suggesting that the treatment diminished vaccine acceptance. We estimated the impact of the intervention for the following cases (see Figure 1): i) individuals with zero vaccines, ii) all individuals (regardless of vaccination status), and iii) for each of the five treatments. 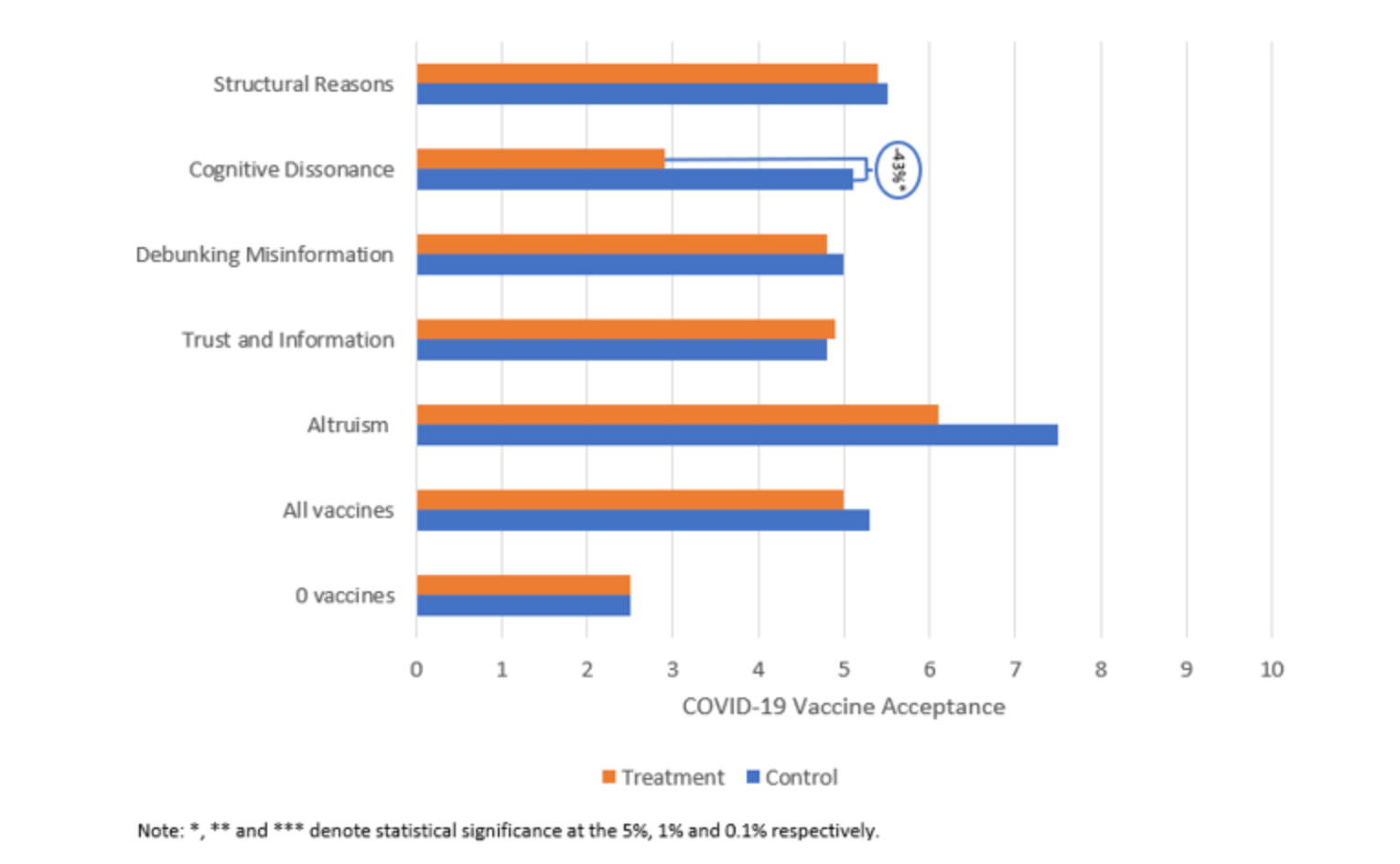 A group of interviews conducted ex post to understand the results of the experiment informed us of the following: