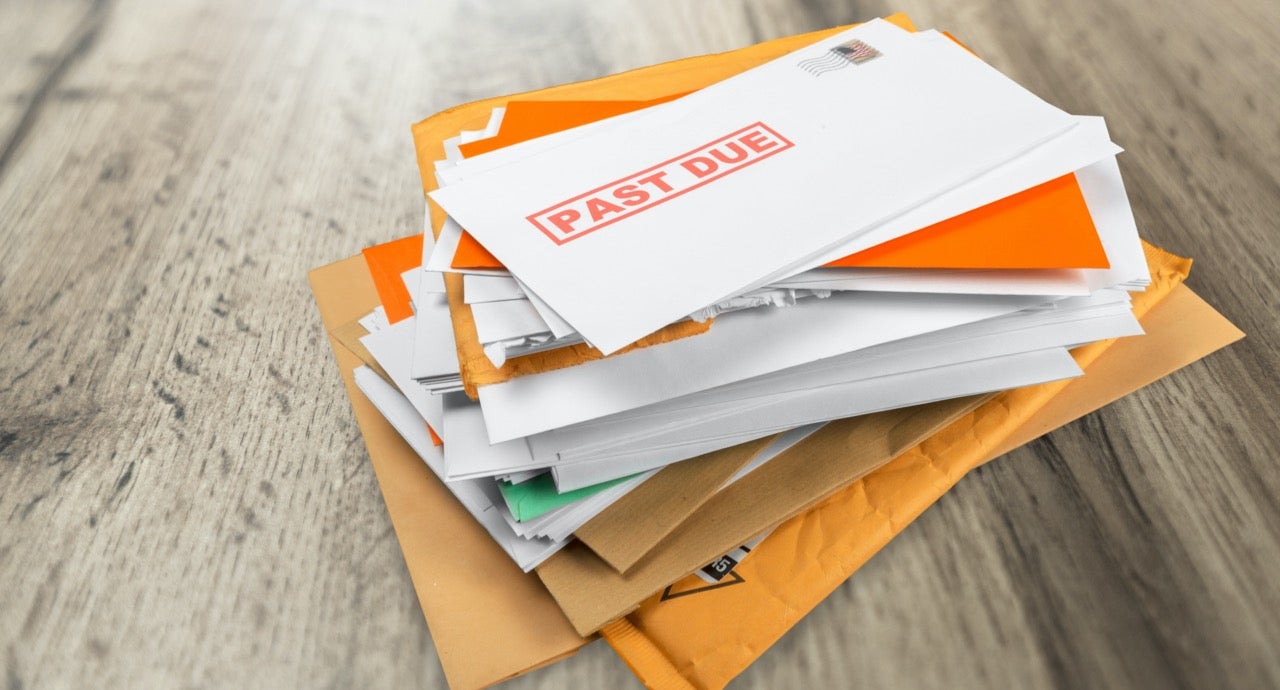 Finding strategies to increase contributions to public revenues, especially compulsory sources like taxes, is a critical issue in Latin American countries. The academic literature has focused on the standard interpretation of tax compliance, suggesting that the decision to pay taxes depends on the differences between the monetary benefits of evading taxes and the potential cost of a penalty if detected. However, penalty rates are not the only explanation for levels of compliance. Subjective beliefs about enforcement and penalty rates, beliefs about other taxpayers’ behavior, and beliefs about the government’s use of resources are understudied factors that could also influence the decision to p­­ay taxes. There consequently exists an opportunity to further explore these understudied factors with the help of behavioral science tools and evaluate the effectiveness of these tools in increasing tax compliance.

To test the role of provision of information on tax compliance, the authors partnered with the municipality of Junín, Argentina, to design and implement a behavioral intervention that consisted of redesigning the property tax bill to include different messages. The messages increased the salience of three determinants of compliance: enforcement and penalties, level of compliance of neighbors, and efficiency of government use of taxes.

Approximately 23,000 individual taxpayers of the property tax were randomly divided into four groups. One group received no treatment (the control group), while the other three were treated with a different message based on the three determinants of compliance. The control and redesigned bills were sent in August 2011 for payments due in September-October 2011.

Hassle factors: We frequently do not act on our intentions because of small factors or inconveniences that hinder us or make us uncomfortable. This could simply be how the information is presented, its length, or additional actions to execute a decision. In this context, taxpayers might underestimate the cost of non-compliance because they might fail to correctly compute the monthly compound interest on their debt if they decide not to pay their taxes on time.

Social norms: The unwritten rules governing behavior within a society. A distinction is drawn between “descriptive norms,” which describe how individuals tend to behave (for example, “most people arrive on time”), and “prescriptive norms,” which establish what is considered acceptable or desired behavior, independent of how individuals behave (“Please arrive on time”). In the diagnosis phase of this intervention, it was identified that taxpayers’ beliefs about their neighbors’ compliance behavior were inaccurate.

Reciprocity: A social norm that involves exchanges between individuals, with one responding to the other’s action with an equivalent action. Reciprocity can be positive, such as returning a favor with an equivalent one, or negative, such as punishing another in response to a negative action. In this case, also from the diagnosis phase, it was found that taxpayers’ beliefs about the use of the taxes collected by the Municipality were inaccurate.

Framing: Given the tendency to draw different conclusions depending on how information is presented, options can be presented to emphasize the relevant part of the information, as well as to highlight the positive or negative aspects of a decision, leading an option to be perceived as more or less attractive. An information strategy containing messages directed to increase tax compliance was implemented in this case. For some, the information was framed around enforcement and penalties, or around neighbors’ level of compliance. For others, it was framed around the efficiency of government use of taxes.

Aiming to test the determinants of tax compliance, the authors partnered with the Municipality of Junín, Argentina, to create an information strategy to help them increase tax compliance. The property tax on which this intervention was based, locally known as tasas, is levied on individuals bimonthly according to the size of their property and the services they receive from the local government, such as street lighting, trash collection, and street-cleaning. The advantage of this type of tax is that the government knows with certainty how much each taxpayer should pay. The only way to evade this tax is by not paying it, as underreporting is not an available option, as it usually is with income-related taxes. Given this, the compliance rate can be easily identified for each treatment. The primary outcome is the measure of taxpayers who paid in full their total tax liabilities for the intervention period.

The Municipality agreed on modifying the tax bill of the property tax to include the intervention’s information (see Figure 1). Using the tax bill as the means of communication with taxpayers allowed a combination of words and pictures that could have the maximum impact for conveying the message intended with each treatment. The new bills were more colorful and featured a bolder graphic design and, unlike the old bill, included space for messages and related pictures (see Figure 2). The control group received the new bill without a message or picture, and the treatment groups received the new bill containing the following messages: 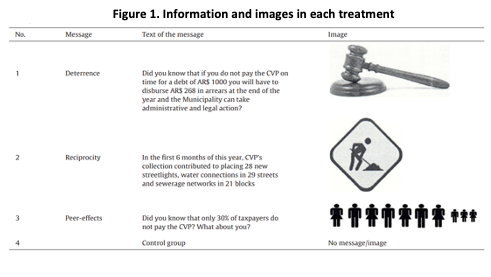 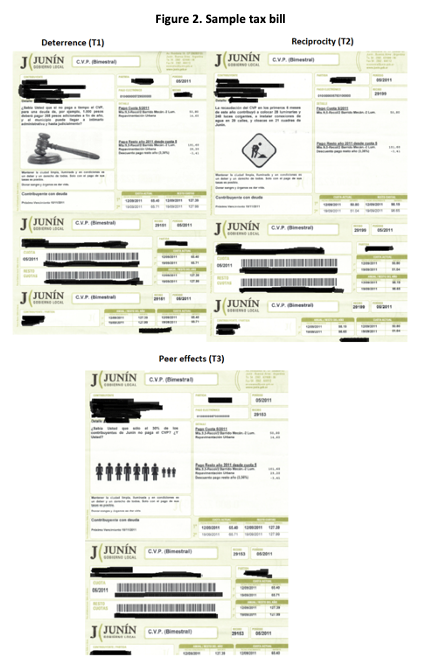 The main challenge with informational tools is that delivery, even in the form of hard-copy tax bills sent to each house, does not guarantee that messages are opened and read by the recipients. Therefore, potentially only a proportion of taxpayers assigned to a treatment read the message they received, and this could bias the results downwards. Another challenge that could represent a downward bias in the results is contamination of the control group if treated taxpayers shared the message they received with neighbors assigned to the control group.

The intervention had positive to null effects on tax compliance. 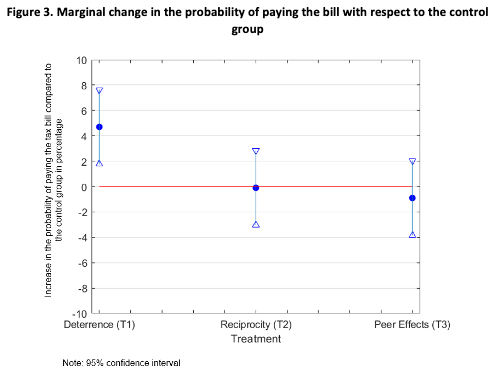 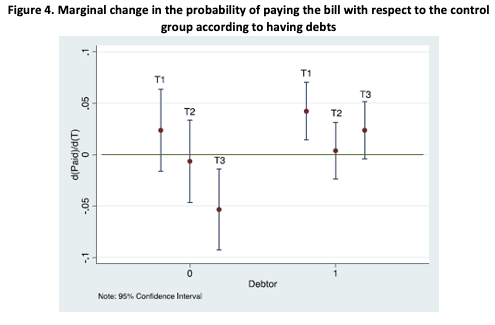 This intervention generated lessons regarding the role of diagnostics in understanding why people are not paying their taxes and revising communication in light of those beliefs. Governments should be aware that “universal” policies can backfire, as the same information can trigger both positive and negative behavioral responses. Therefore, these types of informational interventions should be customized according to types of taxpayers.

It is worth noting that Junín’s government continued to work on improving tax compliance after taking active part in the implementation of the information campaign. This underscores the importance of the involvement of local authorities in this type of intervention and how they can use experimental findings to build local capacity.