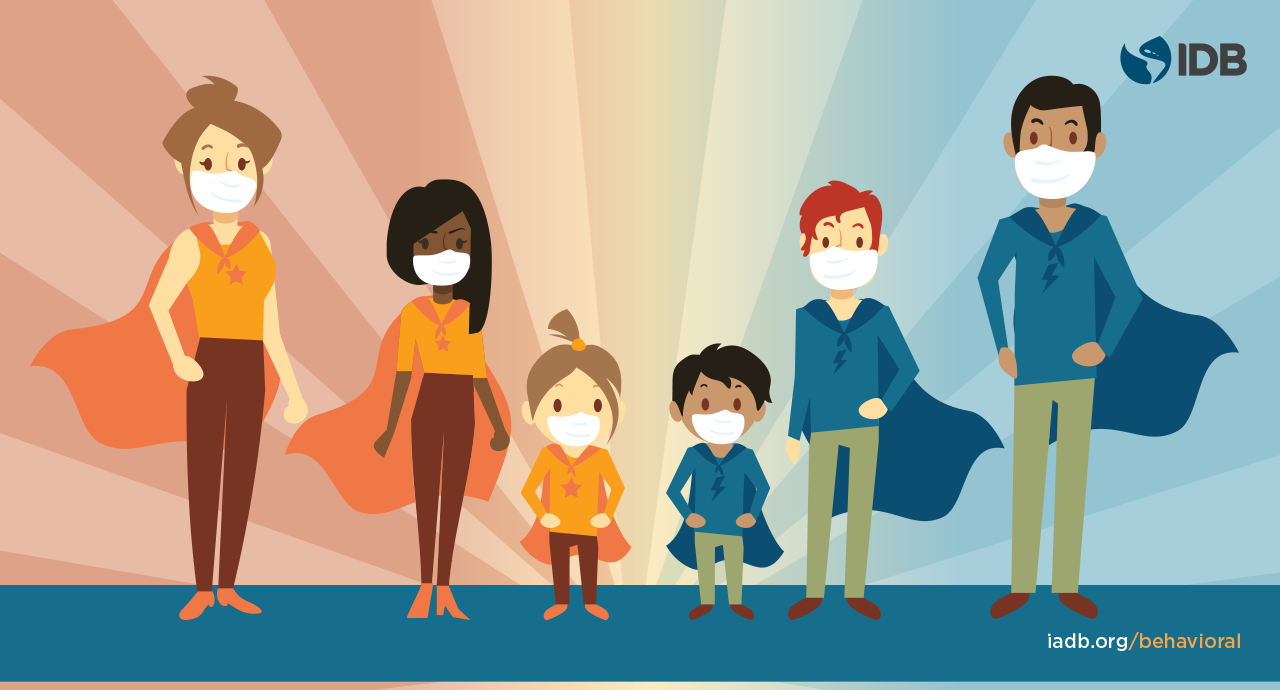 Tens of millions of people around the world have suffered from COVID-19, and the pandemic has taken a tremendous toll in terms of both lives lost and economic activity. Most countries have fallen into deep recessions where unemployment, poverty, and inequality rates have risen sharply. Fortunately, several vaccines have been approved worldwide. They represent the most potent defense against COVID-19, and the faster the world gets vaccinated to the level required to obtain herd immunity, the faster it will be on its way to economic recovery. While vaccine hesitancy represents a significant barrier to reaching herd immunity, this challenge provides an opportunity to test the effectiveness of behavioral science tools in increasing vaccine acceptance.

To increase COVID-19 vaccine acceptance, the Behavioral Economics Group at the IDB developed an online intervention based on a “kitchen sink” approach of behavioral tools. An experiment was embedded in the intervention to test its efficacy. The intervention was run between May and August, 2021, in partnership with the Guanajuato State Government in Mexico.

Availability heuristic: Individuals judge the probability of a future event occurring based on the ease with which an occurrence of such an event comes to mind. For the case of COVID-19 vaccines, it is easy to remember negative events that were covered in the media, and this can lead to an increase vaccine hesitancy. For example, news coverage about the development of the vaccine and its potential negative impacts can lead the population to believe that the vaccine is more dangerous than it is.

Cognitive overload: The cognitive load is the amount of mental effort and memory used at a given moment in time. Overload is when the volume of information provided exceeds an individual's capacity to process it. We have limited amounts of attention and memory, which means we cannot process all the information available. Even when there is an abundance of information about the efficacy and safety of the COVID-19 vaccine, people might be worried about many other different things, leading them to dismiss calls for action to get vaccinated as soon as possible to reach herd immunity.

Framing: Given the tendency to draw different conclusions depending on how information is presented, the desired options can be presented so as to emphasize the relevant part of the information, as well as to highlight the positive or negative aspects of a decision, leading an option to be perceived as more or less attractive. In this case, we framed the development of the vaccine as a technological innovation that needs to be used to stop COVID-19.

Reciprocity: Is a social norm that involves exchanges between individuals, in which one person responds to the action of another with a similar one. It most commonly refers to exchanges involving positive actions, such as returning a favor with another similar favor. Our intervention portrayed a young female as an advocate for COVID-19 vaccination while having her family as the main beneficiaries.

Simplification: Reducing the effort required to perform an action by making the message clearer, cutting the number of steps or breaking down into simple, easier steps a complex goal. In this case, we portrayed the vaccine inside of a shield that is stopping COVID-19.

The Behavioral Economics Group in coordination with the Government of Guanajuato to run the behavioral intervention called "Are you really the Coronahero you think you are?". This intervention was an online quiz that used gamification features to teach the population about simple rules of thumb that would make them safer during COVID-19. This intervention, which focused mainly on increasing vaccine acceptance, was a follow-up to a previous campaign run by the same team that concentrated on handwashing, facemask use, and social distancing. The first stage of the project ran for three weeks, starting on May 7, 2021 and recruited 5,233 people. The second wave of the campaign ran from July 27 to August 10, 2021 and recruited 784 people. In total, 6,017 people from Guanajuato participated in the study. The intervention was disseminated through online social media, WhatsApp messages, official websites, and an email campaign to the state university and high schools by the Government of Guanajuato in Mexico. Given the dissemination channels, the recruited sample was more educated and younger than the average Mexican. Also, 61 percent of the sample was female.

To see if the quiz had any effect on vaccine acceptance, we ran an experiment embedded in the behavioral intervention. The control group answered a question about their attitudes toward the COVID-19 vaccine before the behavioral intervention. In contrast, the treated group responded to the question after going through the intervention. The assignment of the groups was dependent on their choice of an image. The images were very similar and did not change, but the order of the images’ appearance was randomized.

The question we asked to measure COVID-19 vaccine attitudes was the following: 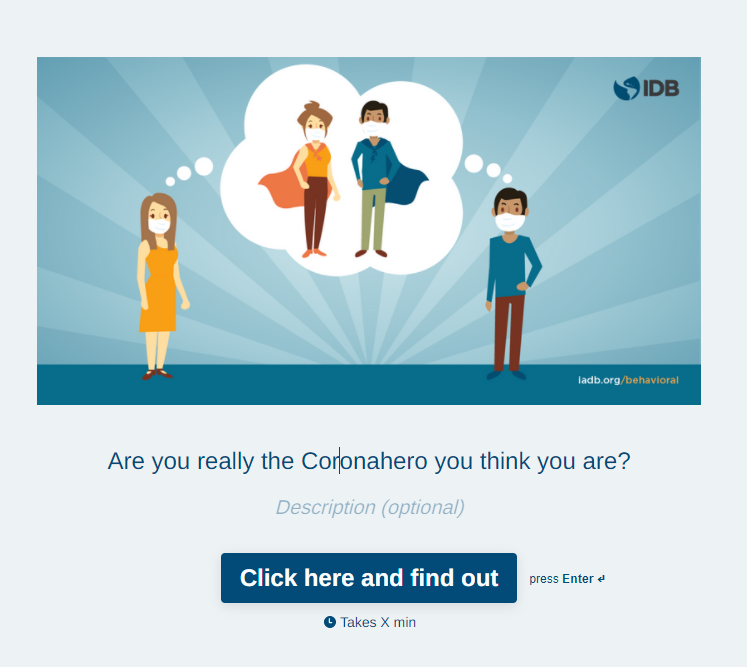 It is difficult to reach the population who is completely opposed to or undecided about  vaccination efforts. The data show, however, that most quiz-takers had a positive attitude toward COVID-19 vaccines of 7 or higher.

In addition, while this intervention is active in other countries, and entities like the Association of the Caribbean States and the Ministry of Health of Honduras are currently trying to improve vaccines attitudes with our intervention, not enough data is available to measure the impact. 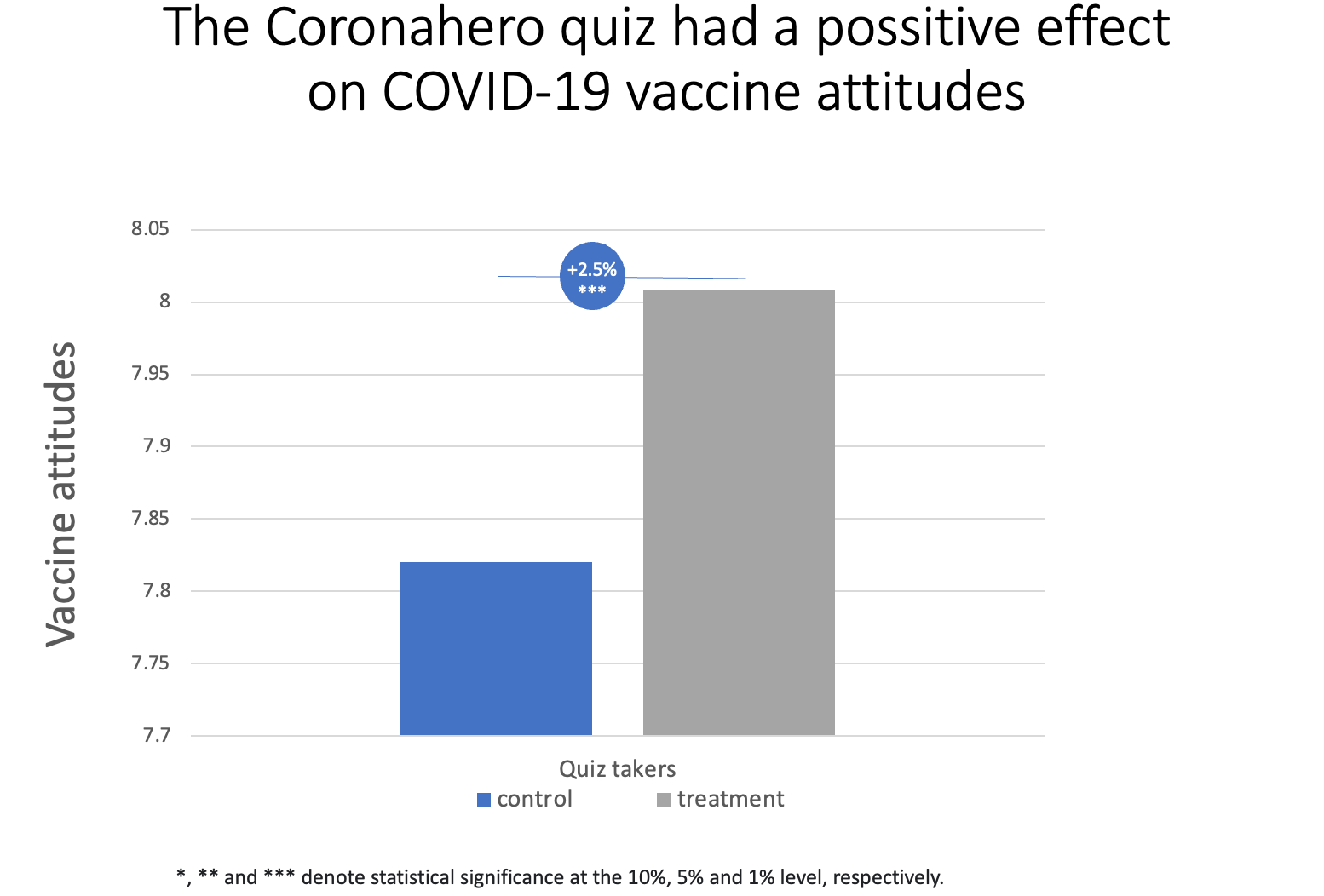