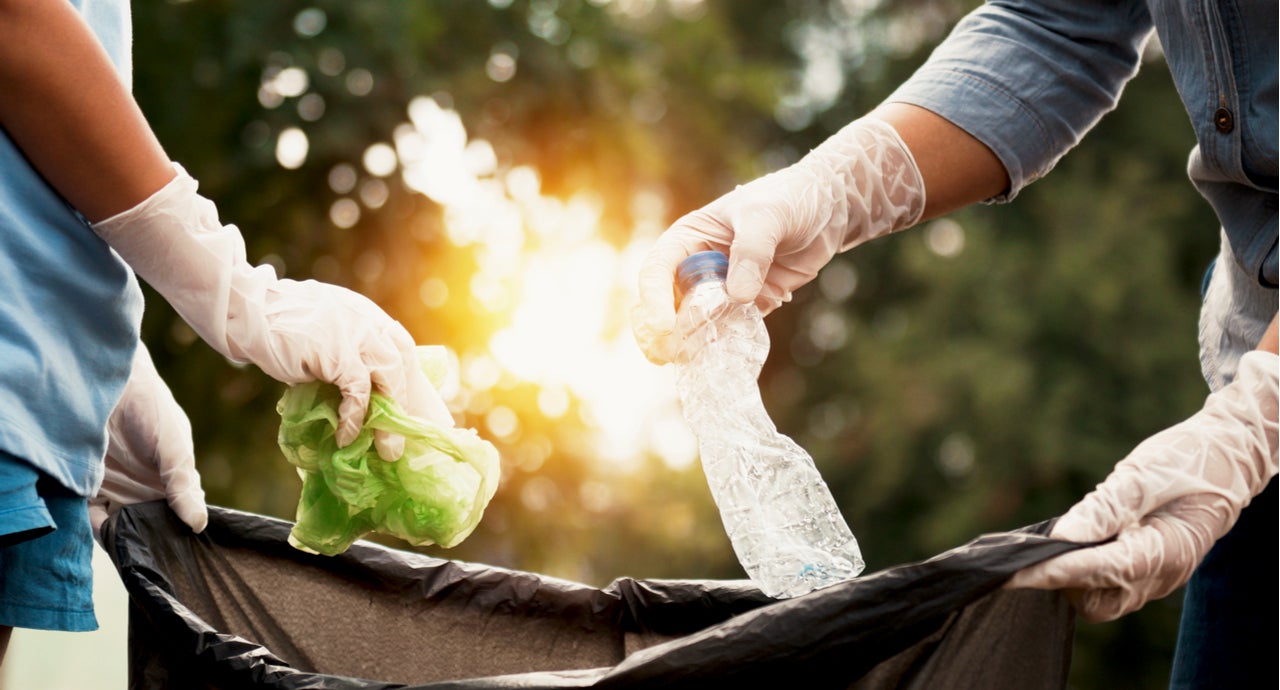 Seeking to test different approaches to improve shared neighborhood communities and spaces, the city of Buenos Aires launched several incentive programs for citizens. These aimed at strengthening their sense of belonging and commitment to the city and to improve their relationship with the government. To recognize and motivate civic behaviors that produced benefits for the entire community, the city designed incentive programs to promote teamwork and cooperation between citizens and the government.

In partnership with the city, we decided to analyze if a neighborhood contest informed with behavioral insights could promote collaboration among neighbors to maintain urban infrastructure clean.

Keeping neighborhood streets and sidewalks clean is a typical civic activity requiring coordination and collective action among citizens. A neighborhood block is a public good from which all neighbors benefit, although no one resident is the sole owner. Engaged neighbors will maintain these shared spaces, but there will always be incentives not to undertake the work while waiting for someone else to do it (free riding). These incentives aggregated to the community level generate a “tragedy of the commons” whereby individual users acting independently, according to their own perceived self-interest, produce consequences contrary to the common good of all users by spoiling, in this case, the public space.

The program called “It’s My Block” aimed at improving the maintenance of the streets and sidewalks of the city by promoting good-neighbor habits and behaviors. Of the blocks that participated in the program, the cleanest ones were awarded exemptions from municipal fees for lighting, sweeping, cleaning, maintenance, and street drainage, and also real estate tax.

Prescriptive norms: These refer to what society approves or disapproves of—that is, what is considered to be right or wrong—regardless of how individuals actually behave. Such norms are useful for reaffirming or encouraging what are considered positive individual behaviors while discouraging negative ones. In the context of our study, the acceptable behavior is to pay taxes when they are due to the government. Presenting prescriptive norms to a group can help change unhelpful behaviors, in this case tolerating graffiti, for example, or pet owners and their dog waste. The incentive program relayed prescriptive norms to targeted neighborhoods in order to change uncivil behaviors.

Descriptive norms: These norms describe how a social group behaves, without regard for whether the behavior is good or bad. For example, the descriptive norm for dog owners in Buenos Aires may be that no one cleans up after their dog. In that case, presenting the prescriptive norm—that is, what is considered to be right or wrong—could help improve civic behavior.

Status quo bias: It is the tendency to maintain the current state of affairs, even when change is clearly better. This current status, or status quo, is used as a reference point, and any change with regard to this reference is seen as a loss. In this case, cleaning up after your dog could be perceived as a loss, in this case, of time or personal dignity.

Lack of a sense of ownership.

Reminders: They can take many forms, such as an email, a text message, a letter, or an in-person visit reminding individuals of some aspect of their decision-making process. Reminders are designed to mitigate procrastination, oversight, and cognitive overload.

Loss aversion: It is the idea that losses cause a distress that exceeds the happiness brought by a gain of the same size. Threat of loss can trigger an aversion that can be leveraged to nudge behaviors in a positive direction.

Reciprocity: This social norm involves in-kind exchanges among individuals, particularly when one person’s action is met with an equivalent action from another person. It is generally associated with positive reactions—for example, returning a favor with an equivalent favor. Reciprocity can also involve retaliatory reactions, such as punishing another individual for negative action.

After an outreach campaign, interested citizens were required to set up online accounts where they provided their personal data. Limited logistical capacity led the city to narrow the selection of participating blocks. The city selected the first 25 percent of the sample following the population distribution by neighborhood across the city. The remaining 75 percent of the sample considered the blocks with the highest number of individuals registered per block, weighted by the block’s population density.

A total of 2,123 blocks were selected for participation. Around 30 percent of these blocks also took part in the first iteration.

The contest used the Cleanliness Index (“IDL” in Spanish), which is maintained by the Buenos Aires Ministry of Environment and Public Space as a measurement of street and sidewalk cleanliness. This index considers five criteria:

Participating blocks were randomly selected to receive either an enhanced communications kit (1,015 blocks) or a basic communications kit (985 blocks) for the duration of the program. The enhanced kit included emails, a flyer, a quiz, a neighborhood graphic, and a phone call, all reinforcing the notion of cooperation among neighbors. Figure 1 shows the timeline of the intervention and treatments.

Figure 1. Summary Timeline for the Treatment and Control Groups

The program prize was awarded to the registered participant(s) of the winning block. The prize consisted of an exemption to the lighting, sweeping, cleaning, maintenance and drainage fees in addition to the real estate tax. Those already exempted from these fees and taxes would receive a high-value metro card . 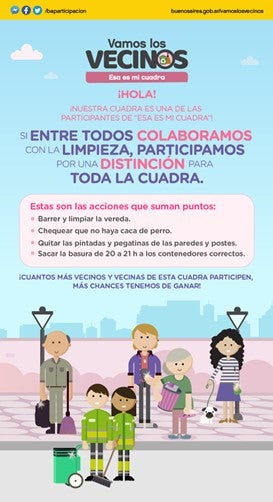 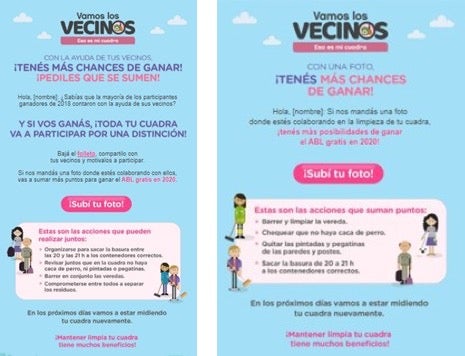 Participating blocks were not randomly selected but rather chosen according to the number of registered people, location, and so forth. This produced small sample sizes less suitable for analysis and clear conclusions.

There were large variations over time in the cleaning index scores: what could be driving these variations? Change in personnel, inspectors’ guidelines, etc.?

Results of the Program 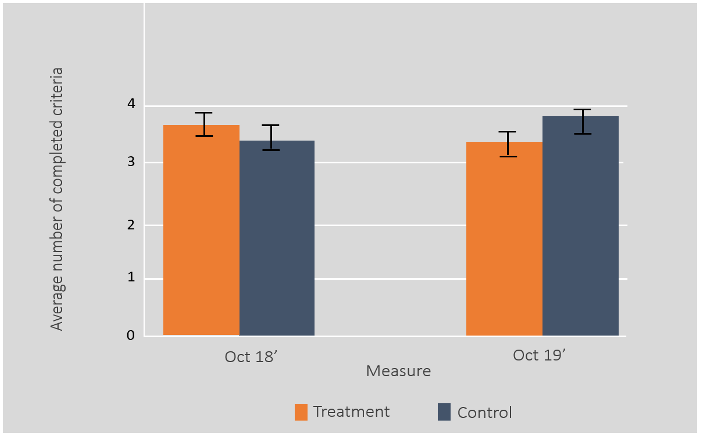 Figure 5. Fixed Effect over 16 Weeks: Both Control and Treatment Groups Have a Fixed Effect

Results among the Treatment Group

Comparing against measurement 1, where participants had not yet received an intervention regimen:

Policy makers use incentive programs for citizens to promote or discourage certain behaviors. But some incentives achieve unintended results. In this case, our analysis found no statistically significant effect of the tax and fee exemption program on street and sidewalk cleanliness. The behaviorally informed messages had an impact only on the removal of dog waste in public areas by the end of the program.

Keeping streets and sidewalks clean requires citizens to act collectively. Individual incentives like the fee and tax exemptions will most likely not promote behaviors like cooperation and collective action. Collective incentives, for instance, public recognition and acclaim for winning blocks would probably achieve better results. Beyond incentives, governments could consider leveraging group identity and social norms to reduce citizens’ tendencies to act independently according to their own self-interest.