Encouraging survivors of violence against women to seek help 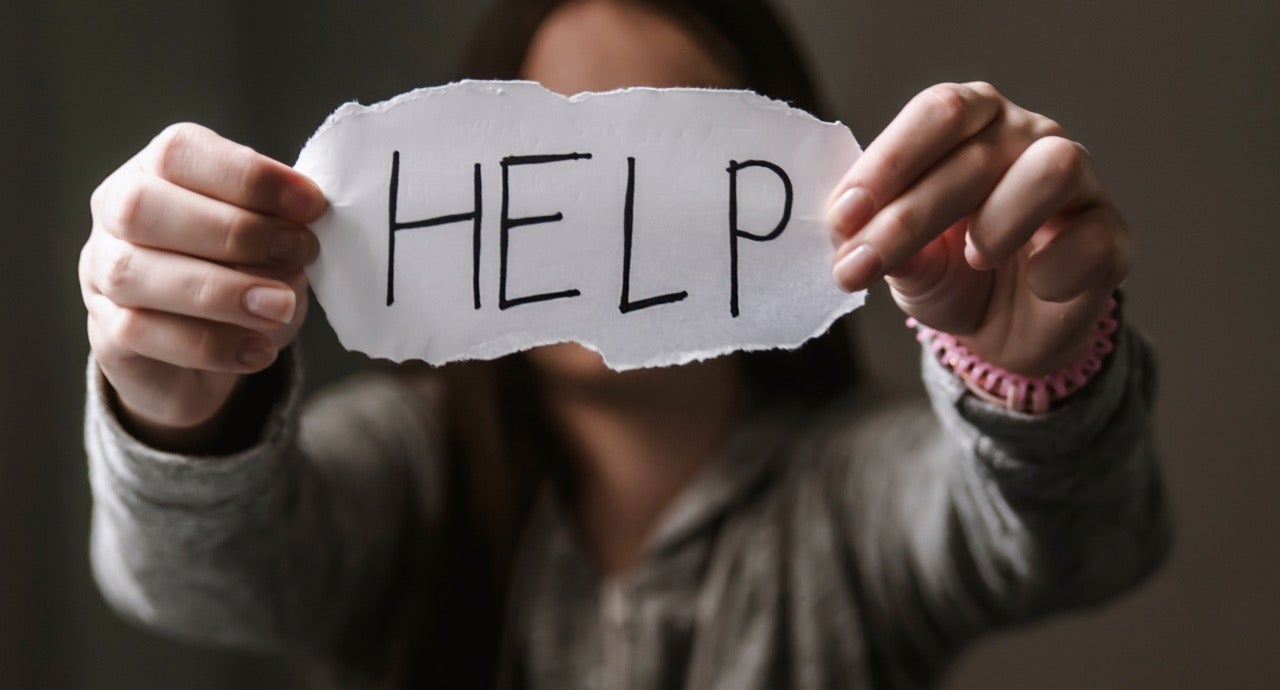 Over a quarter of all women in Honduras aged between 15 and 49 have experienced at least one act of physical violence. Over a fifth have experienced violence from their partner in a relationship during the last year. Yet, only a small share of those women have sought institutional support by the police, courts, or women's organizations. Violence against women (VAW) is even more pronounced during times of crisis and economic hardship, as we are currently experiencing with Covid-19. Additionally, the imperative of isolation and social distancing has strongly limited survivors' opportunities to seek outside help. Both institutional resources and social support network of friends and family are harder to access. Together, these factors show the importance of investigating how to best support survivors to access institutionalized help.

This project tested the effectiveness of different behaviorally-informed Facebook ads on women’s likelihood to seek information about support services, and to seek help in cases of violence against women. A multi-arm individually randomized controlled trial (RCT) was conducted on Facebook in collaboration with the Behavioral Insights Team (BIT), the National Institute for Women (INAM), and Ciudad Mujer in Honduras in Fall 2020. Ciudad Mujer is a one-stop facility offering multiple services to

Uncertainty Aversion: Uncertainty Aversion is a bias that describes a preference for known risks over unknown risks. This manifests itself in different aspects of individual decision-making, such as accessing public health services (reducing our motivations to seek health procedures) or financial decisions (reducing our willingness to take financial risks). Women in violent situations are particularly susceptible to this bias when making the mental leap between the intention to seek help and the action of seeking it, and they face a very high level of uncertainty.

Availability heuristic: Individuals judge the probability of a future event occurring based on the ease with which an occurrence of such an event comes to mind. For example, women might not classify emotional or financial abuse as a form of violence because the available mental representation of violence is mainly associated with physical violence rather than other forms.

Sunk costs: The tendency to follow through on an activity if we have already invested time, effort, or money into it, whether or not the current costs outweigh the benefits. It is mediated by loss aversion and status quo bias. For instance, women might think about the investment of emotions, time, and energy into a relationship, which lowers their probability of ending it.

Intention-Action Gap: Refers to the idea that people do not always do the things that they intend to do due to either failing to get started or getting derailed along the way. For example, they might get derailed due to: (1) enticing stimuli (e.g. partner begins acting kindly temporarily); (2) failing to suppress behavioral responses (e.g. fear of retaliation), among others.

Self-identification: It provides an individual with a sense of oneself based on own physical characteristics, memories, experiences, relationships, group memberships, and values. It has been used in social marketing campaigns on college campuses in the US to reduce VAW perpetration and promote bystander intervention. In this case, the intervention used narrative graphs portraying characters and situations that women in Honduras can recognize and relate to.

Simplification: Reducing the effort required to perform an action by making the message clearer, cutting the number of steps, or breaking down a complex action  into simple, more manageable steps. Taking action to stop VAW might seem like an insurmountable challenge. Thus, simplifying steps might help victims follow through with the implementation intentions.

Reduce Uncertainty Aversion: Measures that directly address some of the uncertainties experienced by women can overcome this aversion. For instance, if women fear the consequences of their actions and what would await them after taking an initial step against VAW, emphasizing confidentiality protocols and clarifying the following steps can reduce uncertainties.

Reduce availability bias by portraying different forms of the same phenomenon: If women do not perceive emotional or financial abuse as violence because their mental representation mostly consists of physical violence, portraying physical, emotional, and financial abuse as different forms of VAV might help to identify their experience as violence.

Debunk sunk-cost bias: Measures that portray the positive possibilities of help-seeking for survivors, as well as reassuring them about their doubts and insecurities, can help address sunk-cost bias. For example, this might include presenting women with counterfactual realities (how their life could be otherwise), allowing them to imagine a better future where they have the potential to gain something, not just lose something, from ending the relationship.

Planning tools: Messages designed to encourage individuals to make a concrete plan for taking action. They urge the individual to divide the objective (for example, reporting a violent relationship) into a series of smaller, concrete tasks (seek information on a website, plan time to call a hotline, prepare speaking points), and anticipate unexpected developments. These often include a space for writing down crucial information such as the date, time, and place.

This trial focused on a population of women Facebook users in Honduras, and recruitment was done via Facebook Ads. The Ads were shown to users who:

These users were randomized into five groups, with four treatments (T1-T4) and one control group. This randomization was automated through Facebook, using their A/B testing allocation algorithm. To define power parameters, a one-day pilot was run in July 2020. The five groups are shown in Table 1.

This study explored a primary, a secondary and an exploratory variable: 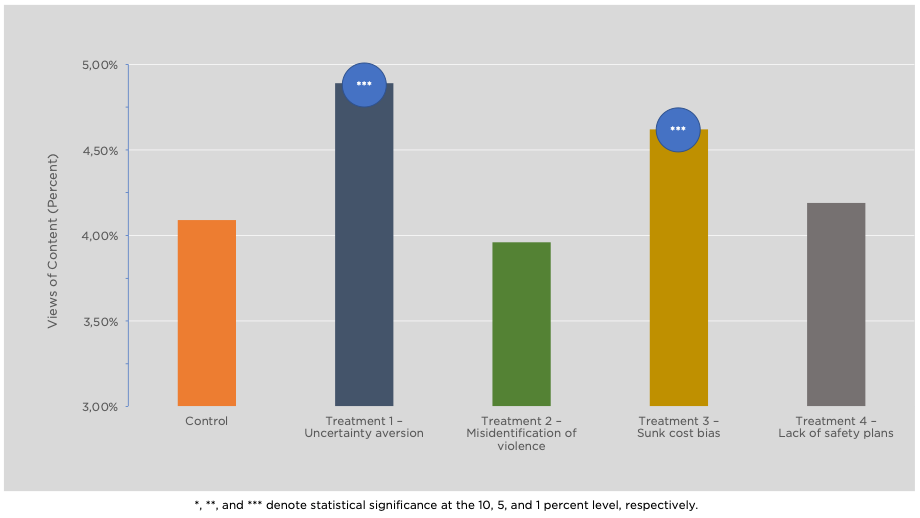 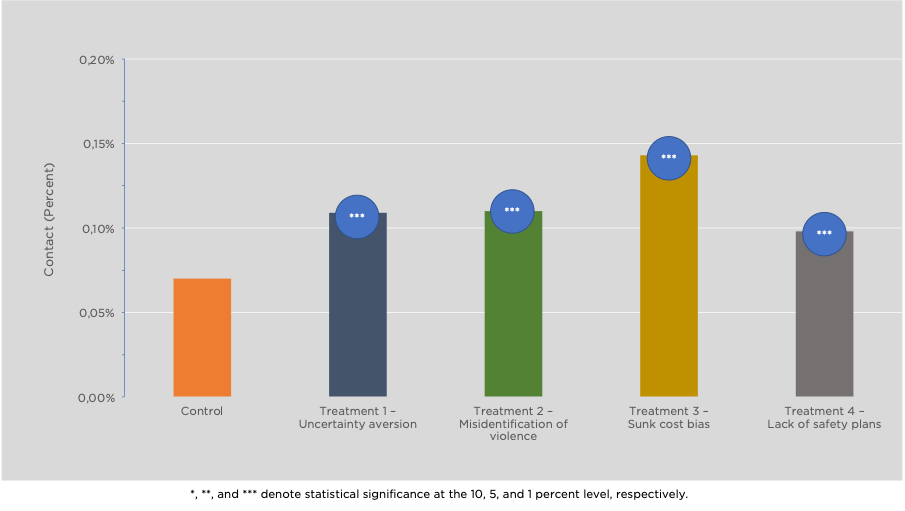