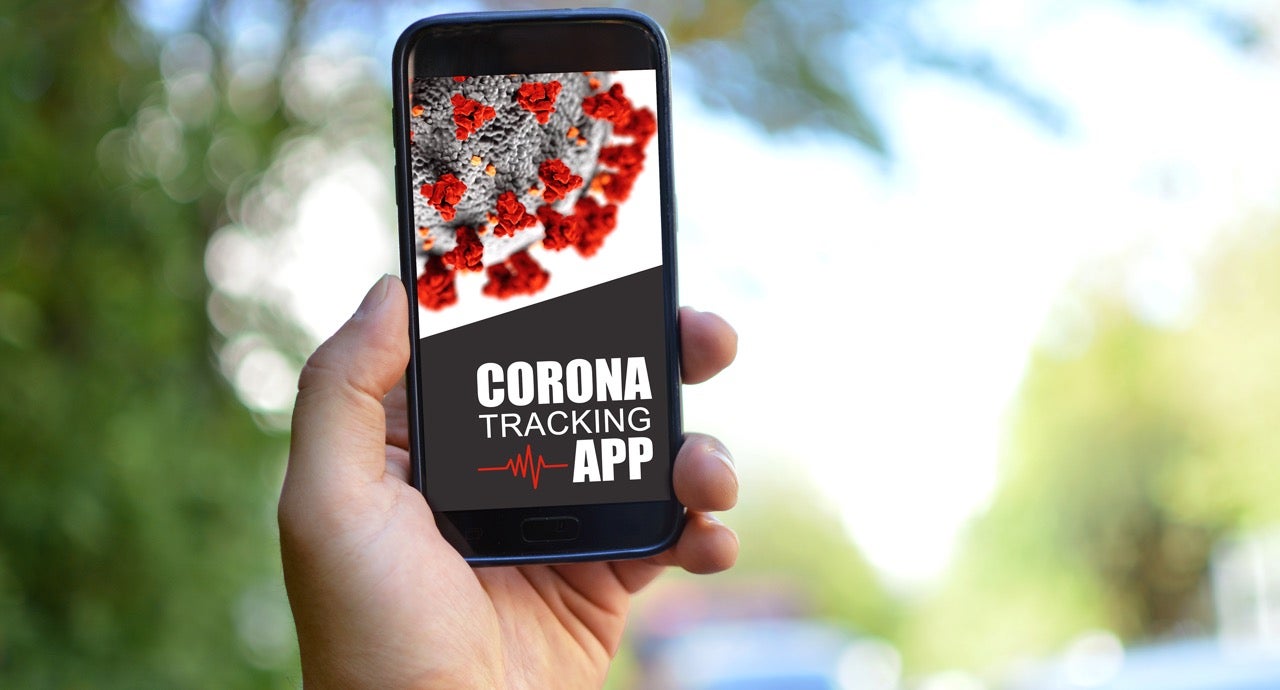 The high contagiousness of Covid-19 exposes citizens to infection risks in a variety of circumstances in which they are not aware of contact with infected people. Thus, in addition to social distancing protocols, contact tracing constitutes a decisive strategy in limiting the spread of the pandemic. Stopping the spread is equally relevant in Latin America, where the economic and health-related consequences of the pandemic have been severe. This represents the background for the following study, which sought to provide research on how to increase the uptake of Covid-19 tracing applications on smartphones.

Behaviorally-informed studies using default options have a proven record of successfully influencing behavior without limiting individual’s freedom of choice. Applications include savings, health, and pro-environmental behavior. This project tried to explore the impact of default modes on the acceptance of contact tracing apps. Conducted in 10 countries of Latin America in the third quarter of 2020, the study used an experimental design to elicit participants’ acceptance rate of contact tracing apps with exposure notification.

Hassle factors: We frequently do not act on our intentions because of small factors or inconveniences that hinder us or make the action uncomfortable. This could simply be the way in which the information is presented, the length of its presentation, or that additional actions must be taken to execute a decision. In this case, the effort to download and set up the app might prevent people from using it in spite of their general interest in doing so.

Short-termism: The tendency to opt for a lesser benefit in the short term over a greater benefit in the longer term. It is associated with a preference for instant gratification. People might prefer spending their time on something more joyful than downloading and setting up an app notwithstanding the higher health benefits this might have for them in the future.

Status quo bias: Our tendency to maintain the current status of things. This current status, or status quo, is used as a reference point, and any change with regard to this point is seen as a loss. In this case, more established hygiene measures on how to deal with Covid-19 might be preferred to the new tracing app.

Overconfidence: Also called superiority bias. It is the tendency to overestimate or exaggerate our own capacity to perform a certain task. Individuals might overestimate their immune response to the Covid-19 virus and underestimate the potential severity of symptoms.

Reciprocity: This is a social norm that involves exchanges between individuals, with one responding to the other’s action with an equivalent action. It can be positive—for example, returning a favor with an equivalent one—or negative—for example, punishing the other in response to a negative action. In regard to tracing apps, their efficiency is influenced by the overall uptake of the population as well as by the rate with which people report their infections to the app.

Mistrust: Individuals who mistrust their government or their fellow citizens might abstain from using an app, for instance, because they fear misuse of their personal data.

Defaults: Defaults are the automatically preset courses of desired action and are effective when the individual making the decision does not change them. This tool is generally aimed at addressing cognitive overload or present bias, supported by our tendency to maintain the status quo. Default modes might present options that are beneficial from a public health perspective as pre-selected; in this case, this involved the automatic installation of a contact tracing app with an opt-out option.

Feedback: It is an effective tool to enhance awareness of the consequences of various choices. It may fill knowledge gaps and foster the search for efficient alternatives. Contact tracing apps might send weekly overviews on the quantity and risk of exposure to people who have tested positive for Covid-19.

We gathered random samples of 1,000+ adults (over 18) from a phone number database in 10 Latin American countries: Chile, Costa Rica, Ecuador, El Salvador, Honduras, Mexico, Panama, Paraguay, Peru, and Uruguay. We then performed a phone survey between July 29 and September 27 of 2020.

The survey included eight modules. Participants were randomly assigned to a treatment or a control group. Treated respondents were asked about their acceptance of an automatically installed Covid-19 tracing app with exposure notification that could be de-installed (opt-out), while the rest of respondents were asked about an app they could voluntarily install (opt-in). The underlying assumption to explain variance was based on previous empirical studies that show how changing the default mode to an opt-out regime significantly increases participation and acceptance.

Other modules included but are not limited to technology usage, trust, and Covid-19-related questions in addition to socio-demographic indicators. Participants were on average 39 years old, and 50 percent of participants were female. There were no statistically significant differences in co-variates between treatment and control group. 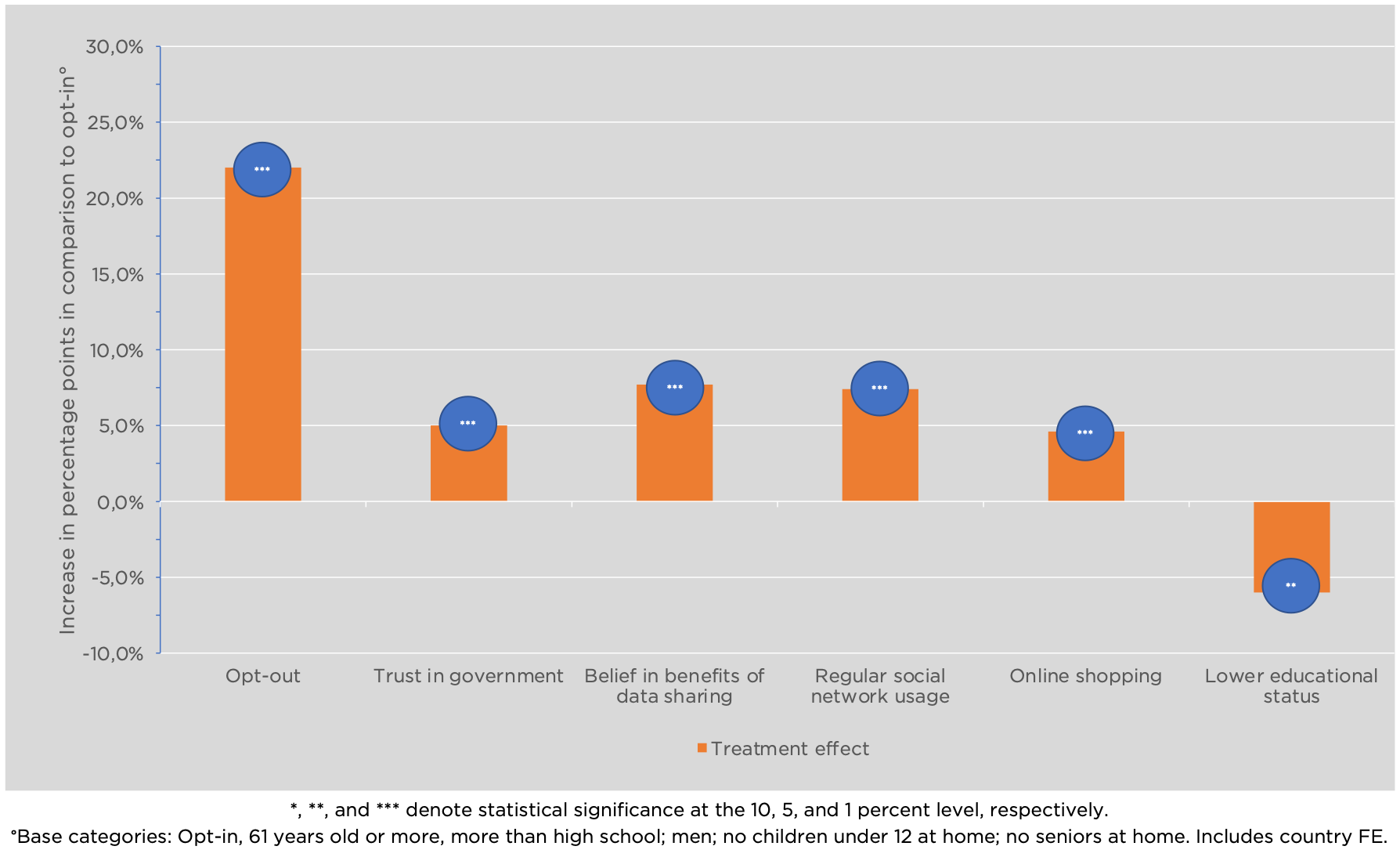