Reducing Behavioral Barriers to Telemedicine Use 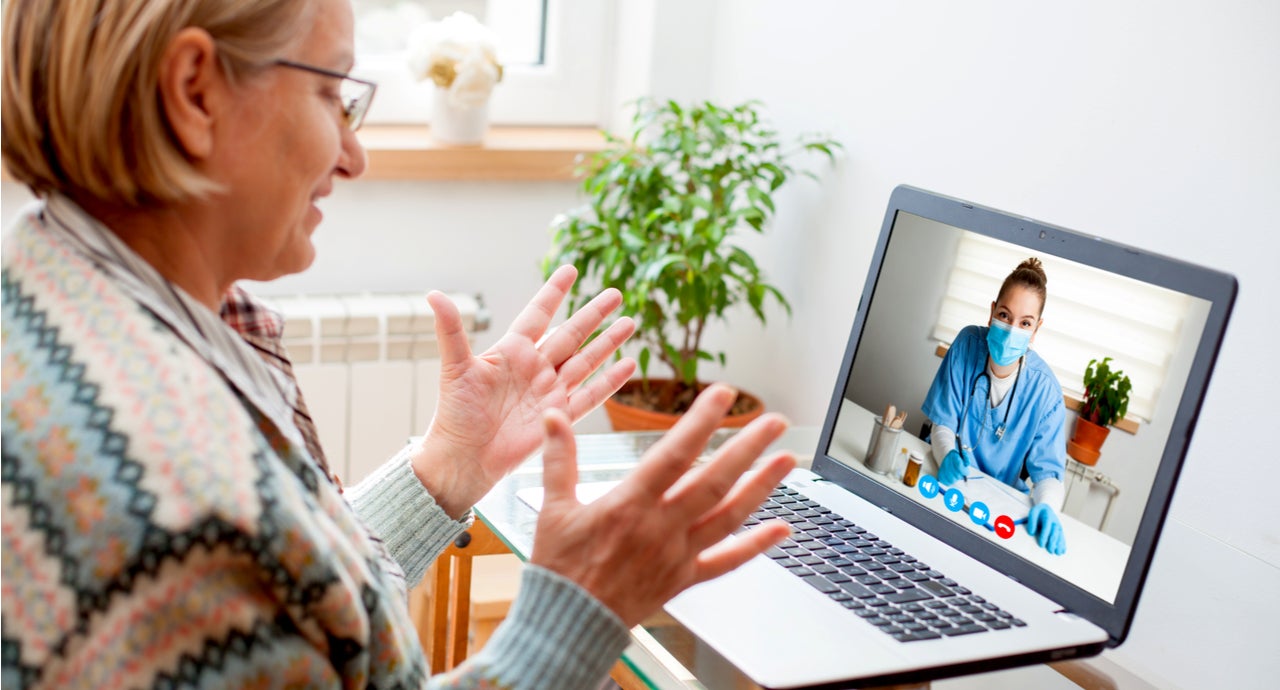 The consolidation of mobile telephony is revolutionizing communication and the way people access services. The mobile phone revolution offers an unprecedented opportunity for the provision of healthcare consultation and services where and when people need it. Telemedicine applications (apps) are harnessing this opportunity to improve patient outcomes by optimizing care, saving time and cost, and expanding access to healthcare services and medical information.

Llamando al Doctor is a video-call medical service available on a digital app that users can download to their mobile phones. The video-call service is available 24 hours a day, every day, and connects users (i.e., patients) directly with qualified doctors. Llamando al Doctor establishes agreements with health-service providers in Argentina that offer the service to their affiliates as part of their coverage plans.

Llamando al Doctor, a private Argentine healthcare provider, and the IDB Behavioral Economics Group carried out a study to understand the impact of telemedicine on the health consumption of users. The study first sought to analyze the effectiveness of different communication methods to promote registration for the app by sending email and mobile phone text messages that detailed its benefits and attributes. The second stage meant to study of the app’s effects on the volume and type of consumption of face-to-face patient–to–health professional consultations.

Status quo bias: It is the tendency of citizens to maintain the current state of affairs, even when change is clearly better. This current status, or status quo, is used as a reference point, and any change with regard to this point is seen as a loss. Patients are used to face-to-face consultations with their trusted doctor.

Lack of information, disinformation: Patients don’t know about the app, and if they do, they do not understand how the app works in terms of cost and availability of doctors.

Mistrust: Mistrust occurs when one party is unwilling to rely on the actions of another party in a future situation. Patients underestimate or distrust the quality of care an app can provide and the app’s ability to manage any queries during a virtual medical appointment.

Reminders: They can take many forms, such as an email, a text message, a letter, or an in-person visit reminding individuals of some aspect of their healthcare decision-making process. Reminders are designed to mitigate procrastination, oversight, and cognitive overload.

Loss aversion: It is the idea that losses cause a distress that exceeds the happiness brought by a gain of the same size. The threat of loss can trigger an aversion that can be leveraged to nudge behaviors in a positive direction.

Social norms: These are the unwritten rules that govern behavior within a society.

Health provider administrative records (sociodemographic characteristics, consumption of healthcare services, app downloads, and registrations) were used to randomize over 22,700 affiliates into treatment and control groups, which were sorted into sixteen strata.

Messages were designed to target affiliates in the treatment group. In total, six messages were sent between July and October 2019: three emails and three text messages. The six messages were split into three pairs of messages, each comprising an SMS and an email, separated by a week’s time. 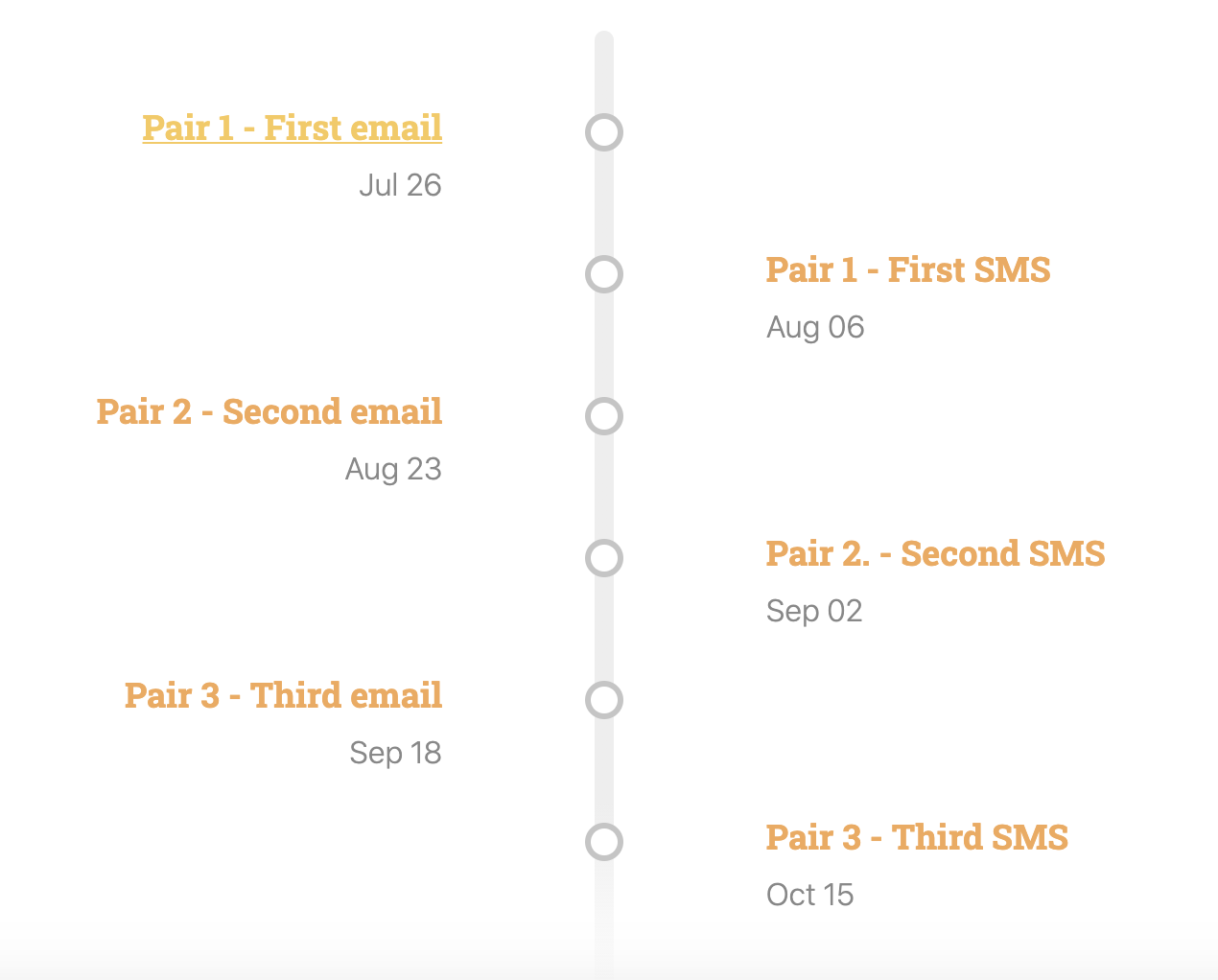 The messages were sent by the health providers’ automated message management system using their contact information database of affiliates (email and telephone). 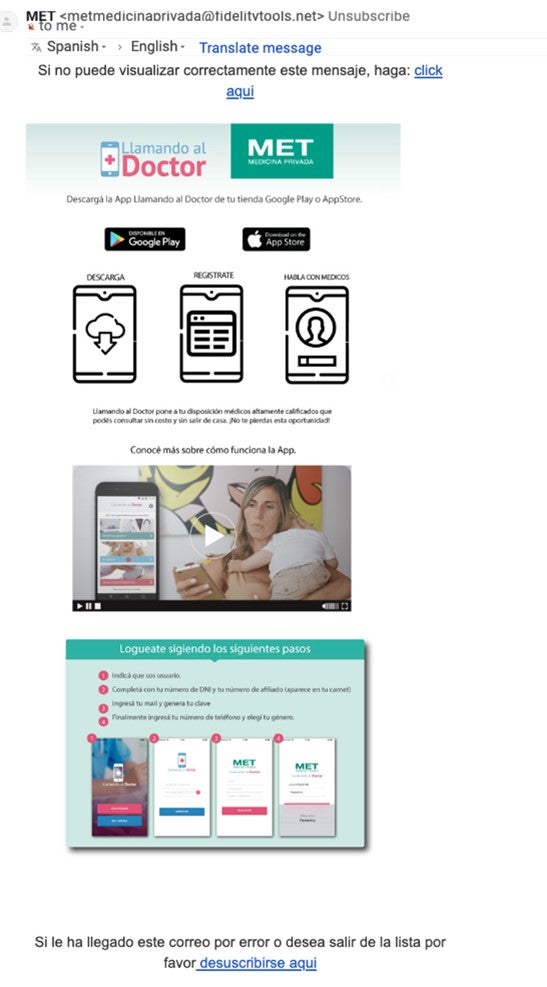 Implementation error: Although affiliates were randomized to a treatment group and a control group, the automated message management system sent the messages to the entire sample and not to the subset of affiliates assigned to the treatment group.

This resulted in all affiliates receiving the treatment (six messages), which precluded a rigorous effectiveness analysis. It also prevented a second-stage evaluation of the effect of this telemedicine technology on health consumption indicators.

A simpler observation of registrations trends with the app within the sample shows a positive correlation between the treatment (messages) and registrations. Figure 1 presents the total number of new registrations between June 2018 until October 2019 (dates of intervention are July 26 to October 15). Figure 2 disaggregates registrations by treatment and control groups. It shows that new registrations peak on the days when treatments are implemented. 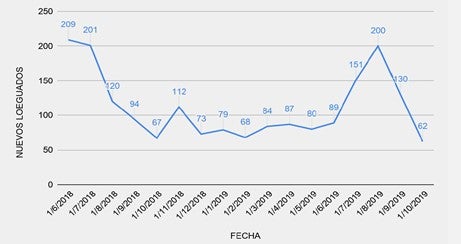