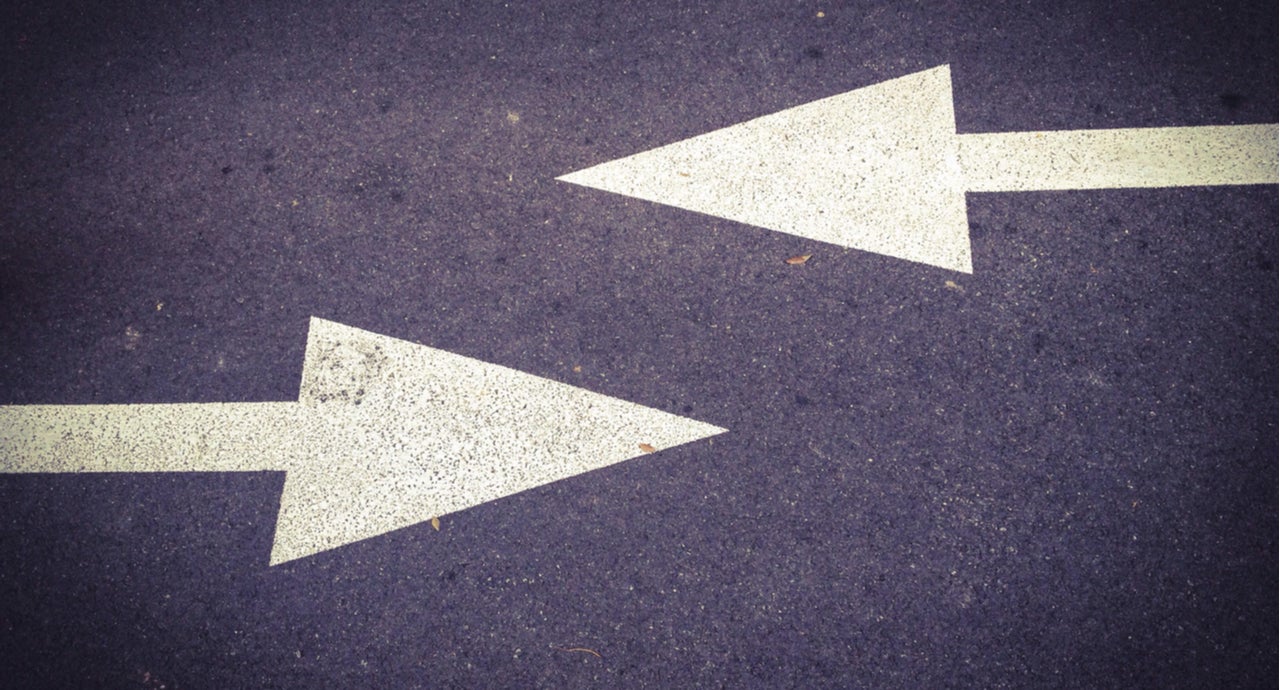 Tax noncompliance hinders the financing of public services for citizens. Enforcement, a crucial tool for any tax administration, has its limits (e.g., technical, legal, moral, and political). In the present context of a severe economic crisis in Argentina, the local government made a priority of persuading taxpayers to comply voluntarily. This decision coincides with a growing interest in explaining what motivates individuals to pay their taxes, and how cost-effective complements to enforcement actions can create a culture of compliance. The starting point of the project was that tax bills lacked a persuasive and salient explanation of why and how to pay taxes. If mere wording differences in the presentation of the tax bill can increase tax revenues during an economic crisis, then tax authorities might be able to increase revenues through the provision of better public services and improved communication.

The project aimed at providing the Municipality of Mendoza with tools and a methodology to test and implement administrative changes to improve tax compliance. The Municipality and the IDB team redesigned the tax bills for the local property tax (tasas). In line with the municipality’s making amicable interventions a priority, the redesign centered on simplifying information and appealing to the fiscal exchange inherent in taxation—i.e., making salient that with tax monies, the administration can provide taxpayers with valued public services. The experimental treatments (tax bills) were delivered in November 2019.

Limited attention: The amount of attention at our disposal at any given moment is limited, which is a reason why we tend to overlook important details and forget things. In this context, taxpayers who in principle are willing to consider the social benefits of taxation in their tax compliance decision, may fail to do so under standard circumstances—i.e. without an explicit reminder of these benefits.

Mistrust: Mistrust occurs when one party is unwilling to rely on the actions of another party in a future situation. Taxpayers who do not trust a government administration may use this as a justification for tax evasion.

Moral suasion: The act of persuading a person or group to act in a certain way through theoretical appeals, persuasion, or implicit and explicit threats. In the present context, a visually supported appeal to the “fiscal exchange” of taxes for services aims at persuading taxpayers of their self-interest. This message might be associated with positive emotions, for example, by advertising public services that benefit children (e.g., renovated playgrounds) with visuals.

The project tested three different municipal property tax bills (treatments). At the municipality’s request, we randomized the treatments to small geographical zones. For a clean analysis, we considered 22,119 taxpayers in 1,593 zones that had not also participated in another intervention. Municipal agents delivered the tax bills November 4–11, 2019, and recorded in-person deliveries, if possible. The bills featured two due amounts (November 21 and December 19, 2019). The data we analyze includes payments through January 9, 2020. 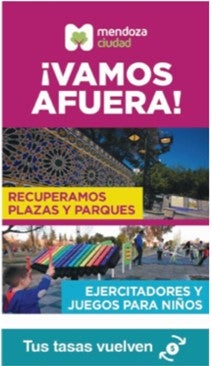 The three treatments tested include the existing bill (T1), a redesigned bill without public service advertisement (T2), and a redesigned bill with public service advertisement (T3). The key element of fiscal exchange (T3) is shown in figure 1. For taxpayers in arrears, there was language urging the payment of outstanding taxes and avoiding judicial proceedings. This language was identical, but possibly more salient, in the new tax bills.

The theory of change posits that the new, simplified bills, in color, will (1) capture the taxpayer’s attention, (2) signal that the tax administration is giving renewed attention to the collection of this tax, (3) indicate more saliently where to pay, and (4) enhance the taxpayer’s perception of a fiscal contract in which valued public services are provided in return for tax payments. Each of 1–4 might lead to increased compliance. The comparison of T2 and T3 isolates the fiscal-exchange appeal effect (4). T1 provides a benchmark for the overall effects of the changes.

To alleviate potential confusion among neighbors receiving different-looking tax bills and to facilitate logistics, treatments were randomized to small geographical zones. To avoid contamination from another innovation, tax debtors affected were excluded from the analysis. Printing in color represented an additional cost compared with costs of the standard black-and-white tax bills.

Figure 2 presents an overview of results, plotting the percentage of taxpayers in each treatment group who made a payment for the Nov.–Dec. municipal property tax bill.

Figure 2. Treatment Effects as a Proportion of Paying Tax Bill 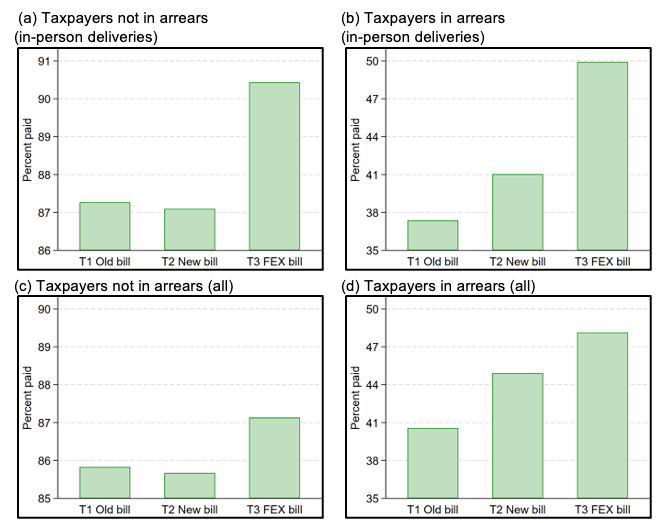 A Playground for Tax Compliance?: Testing Fiscal Exchange in an RCT in Argentina