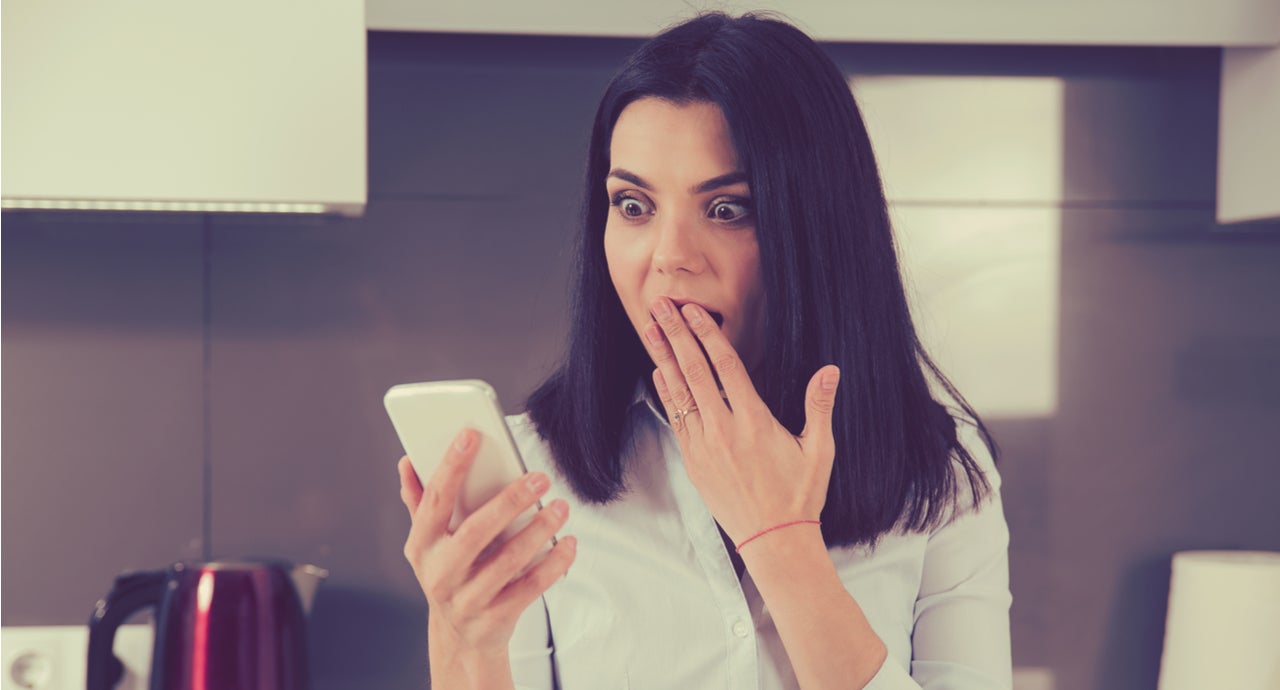 Tax delinquency poses a major problem to most tax administrations in the world. In 2014, Colombia’s National Accountant Office estimated the total outstanding debt to the National Tax Agency, the National Directorate of Taxes and Customs (Dirección de Impuestos y Aduanas Nacionales, DIAN), at $2.5 billion, or about 20 percent of  total  tax  evasion. Finding ways to encourage taxpayers to pay up is paramount for both fiscal and equity reasons. A previous IDB study on delivery methods to remind taxpayers of their obligations focused on three channels—letter, email, and in-person visits—for communicating with delinquent taxpayers. The present study explores the use of personal phone calls, a method extensively used for political canvassing.

This study analyzes the results of a communications campaign launched by DIAN to encourage tax compliance. Under the slogan “Colombia, a commitment we can’t evade,” the campaign centered on phone calls to delinquent taxpayers with outstanding liabilities, who were asked for their verbal commitment to pay. The phone calls were made between April 24 and May 10, 2014.

Prescriptive norms: These refer to what society approves or disapproves of—that is, what is considered to be right or wrong—regardless of how individuals actually behave. Such norms are useful for reaffirming or encouraging what are considered positive individual behaviors while discouraging negative ones. In the context of our study, the acceptable behavior is to pay taxes when they are due to the government.

Availability heuristics: Individuals tend to estimate the probability of a future event based on how readily representative examples of such an event come to mind (i.e., punitive actions that have been taken against delinquent taxpayers in the past).

Mistrust: Taxpayers who do not trust a government administration may use this as a justification for tax evasion.

Reminders: They can take many forms, such as an email, a text message, letter, or an in-person visit reminding individuals of some aspect of decision-making. Reminders are designed to mitigate procrastination, oversight, and cognitive overload.

Framing: The way in which information is presented influences people’s conclusions. For example, options may be presented in a way that highlights their positive or negative aspects, leading each to be perceived as relatively more or less attractive.

Planning tools: These are designed to encourage individuals to make a concrete action plan on important goals, like paying social security. These prompts help individuals to break down a goal  (e.g., being on time to a doctor’s appointment) into a series of small, specific tasks (e.g., leaving work early,  finding a babysitter, postponing a weekly meeting, etc.) and to anticipate unforeseen events.  These prompts often encourage people to write down relevant information such as the date, time, and place of a commitment.

DIAN randomly assigned a sample of 34,783 taxpayers with outstanding tax liabilities to either receive a phone call (treatment group) or not receive any notification (control group).

Callers followed a detailed script once a phone connection had been established:

The contents of the script focused on deterrence and moral suasion. Importantly, the script unfolded as a conversation rather than a rigid text, with multiple interactions between the agent and the taxpayer in order to foster personal interaction (see figure 1).

Moreover, the invitation to attend a meeting at the tax agency further emphasized personal interactions. The call sought to have one of two main outcomes: an appointment at the local agency office or a verbal payment commitment. 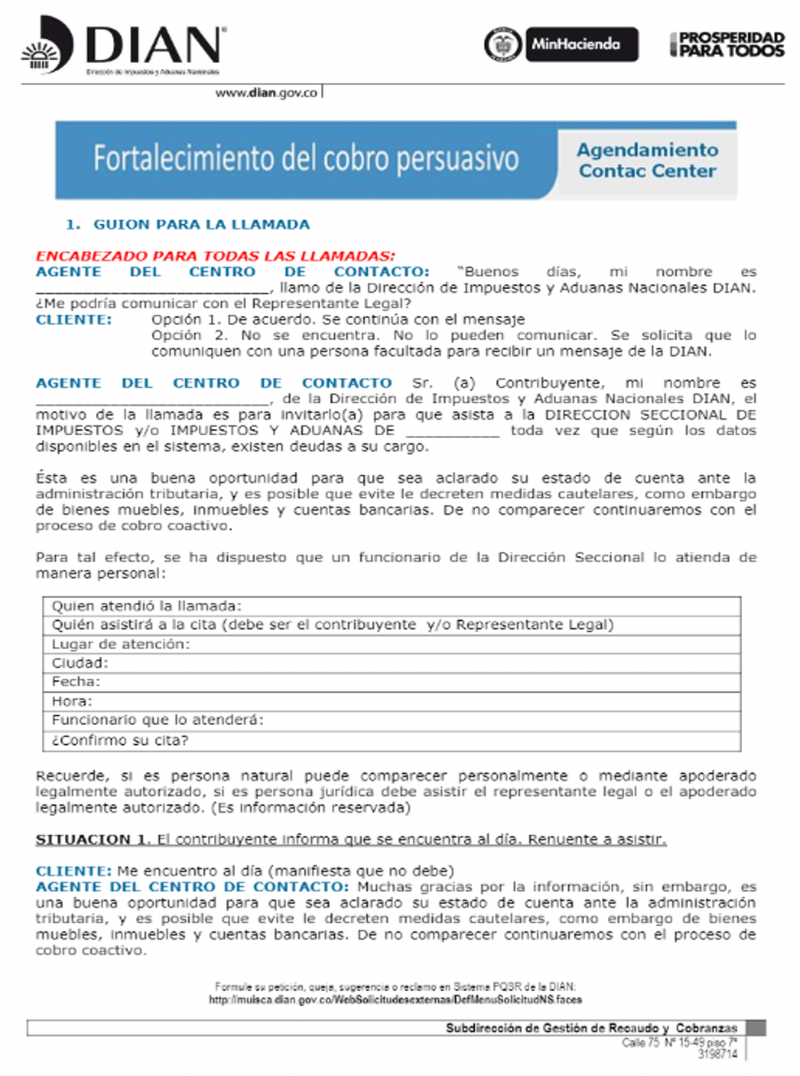 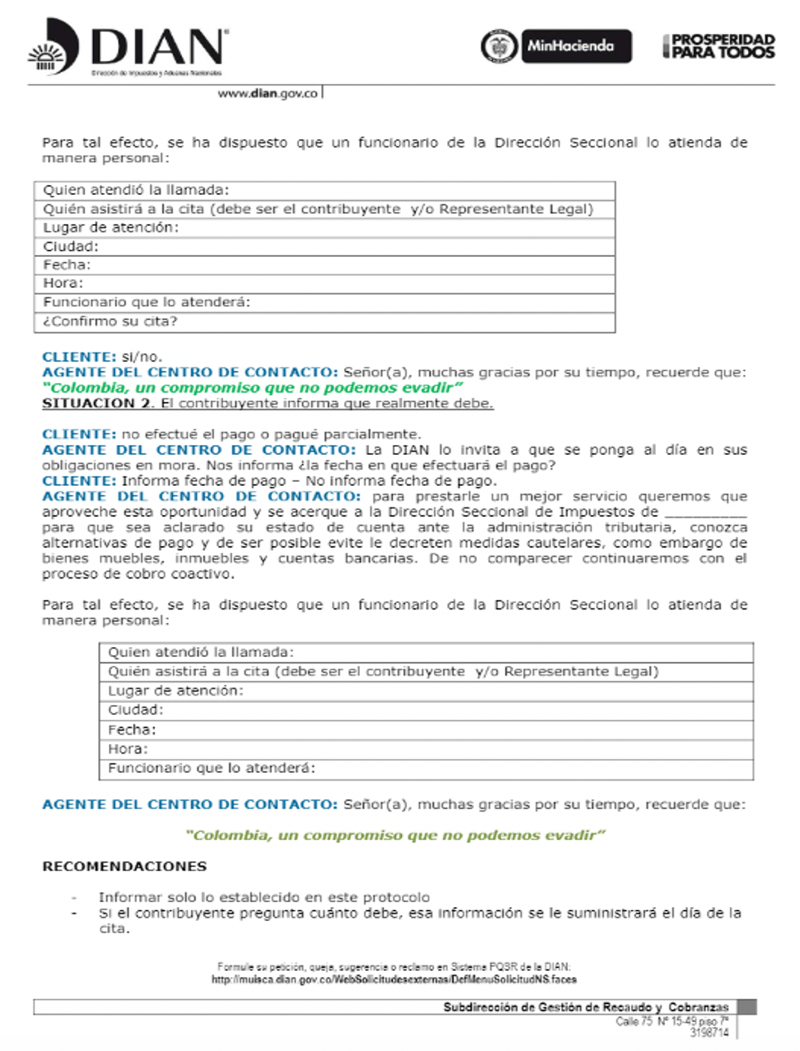 [1] Christopher B. Mann and Casey A. Klofstad, “The Role of Call Quality in Voter Mobilization: Implications for Electoral Outcomes and Experimental Design,” Political Behavior 37, No. 1 (2015): 135–54.

[1] Christopher B. Mann y Casey A. Klofstad, “The Role of Call Quality in Voter Mobilization: Implications for Electoral Outcomes and Experimental Design,” Political Behavior 37, No. 1 (2015): 135–54.

Results indicate that personal phone calls were very effective in increasing the collection of unpaid taxes. 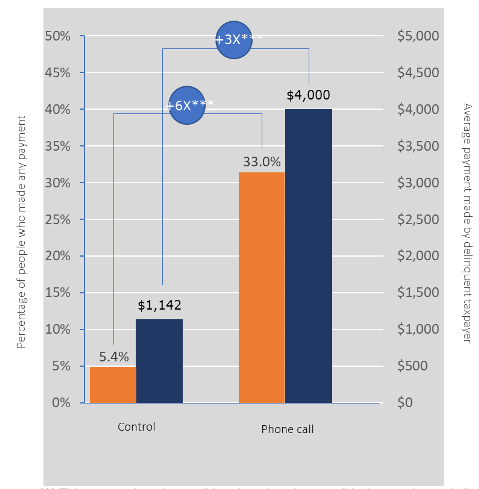 *** This comparison is conditional on the phone call being made, and all results are statistically significant (p < 0 . 001).

Who's Calling?: The Effect of Phone Calls and Personal Interaction on Tax Compl…