How to Best Remind Taxpayers of Their Obligations 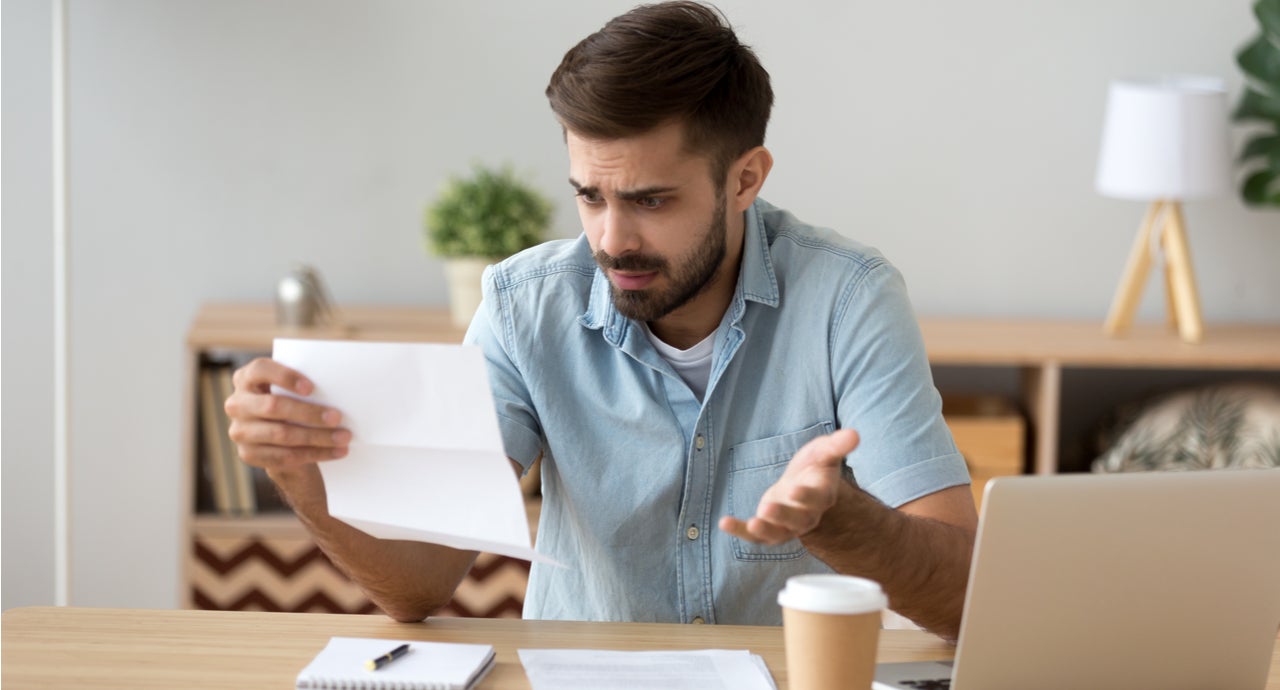 There is growing interest in explaining what motivates individuals to pay their taxes in full and on time, and the best way to deal with tax delinquency. While many studies have evaluated the comparative effect of sending deterrence and moral suasion messages to taxpayers, an experiment conducted with the National Tax Agency of Colombia(Dirección de Impuestos y Aduanas Nacionales, DIAN), analyzes how different methods of delivering the same message affect tax compliance. The agency contacted taxpayers with outstanding tax liabilities through in-person inspector visits as well as cheaper methods such as email and letter. Tax inspectors’ visits are expensive, signaling the severity of the consequences of noncompliance.

Once every few months, DIAN contacts taxpayers with outstanding liabilities (declared but unpaid taxes) by mail and email, sometimes also making sporadic in-person visits. On one occasion, the agency agreed to randomize the delivery mechanism of such messages to test their comparative efficiency.

The messages were sent out in both a physical letter and email, which were identical. They included moral suasion and information on the pending payment, as well as an explanation of the consequences of sustained tax delinquency. More than 20,000 taxpayers participated in the experiment.

Prescriptive norms: These refer to what society approves or disapproves of—that is, what is considered to be right or wrong—regardless of how individuals actually behave. Such norms are useful for reaffirming  or  encouraging what are considered positive individual behaviors while discouraging  negative ones. In the context of our study, the acceptable behavior is to pay taxes when they are due to the government.

Present bias: It is the tendency to choose a smaller gain in the present over a large gain in the future. It is related to the preference for immediate gratification. It is also known as hyperbolic discounting. People with such a bias might value present gratification more than greater benefits in the future—for example, they might avoid paying taxes even when there is a possibility of winning a lottery

Availability heuristics: Individuals tend to estimate the probability of a future event based on how readily representative examples of such an event come to mind (i.e., punitive actions that have been taken against delinquent taxpayers in the past).

Salience: Individuals tend to focus on items or information that are more prominent and ignore those that are less so. Thus, it is important to make key aspects of messages visible and salient and display them in an appropriate place and time.

Mistrust: Mistrust occurs when one party is unwilling to rely on the actions of another party in a future situation. In response to corruption scandals, citizens may mistrust their representatives in the government. Taxpayers who do not trust a government administration may use this as a justification for tax evasion.

Moral suasion: A person or group may be persuaded to act in a certain way through theoretical appeals, or implicit and explicit threats.

In the context of this project, the agency randomized a subset of taxpayers with overdue tax payments into four main groups. One group was assigned to be contacted via e-mail, the second one via physical letter, and the third group was assigned a visit from an inspector. The fourth group was left as a control group. The population of this experiment included all taxpayers with unpaid liabilities from their income, wealth, or sales taxes for the years 2011–13.

The message included in both the physical letter and the email was exactly the same. The message stated the account balance on July 31, 2013, the type of tax, and the year or month it had not been paid. It also included information on methods of payment and the cost that the taxpayer was incurring by not paying (interest and penalties, potential legal action, and possible effect on credit history). Finally, it provided a moral suasion message (“Colombia, a commitment we can’t evade”). The message concluded with the contact information of a tax agency authority. This way, even though the content of the messages was not the subject of the evaluation, careful steps were taken to include all the components that have been identified in the literature as critical to increasing compliance.

During the in-person visits, inspectors followed a protocol aligned with the written communications that had been sent out: the taxpayer was informed about his or her standing tax delinquencies and was urged to pay. Inspectors mentioned the penalties the taxpayer was incurring and the possibility of further legal actions in case of noncompliance. The visit was closed by the verbal delivery of a moral suasion message. 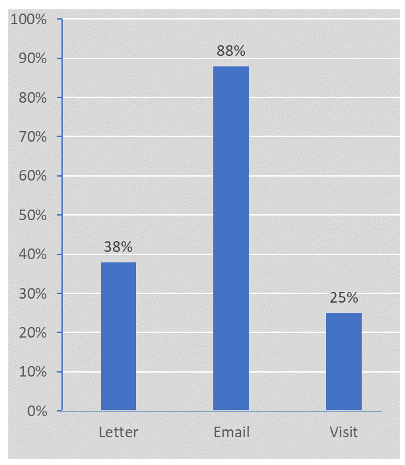 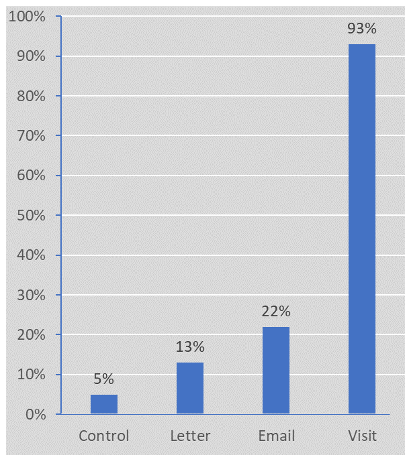 Don't Blame the Messenger: A Field Experiment on Delivery Methods for Increasin…