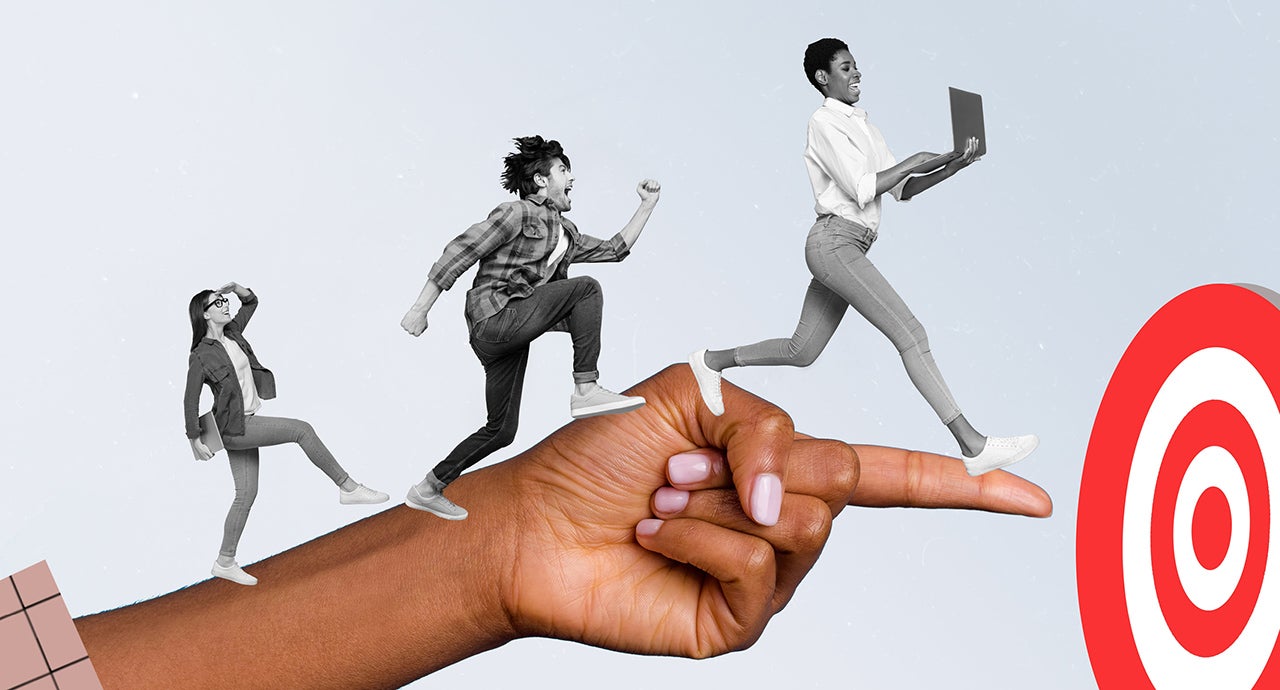 According to the Ministry of Health and Social Protection, cervical cancer is the leading cause of death from cancer among women aged 30 to 59 years in Colombia. Unlike many other cancers, this type is mainly caused by a virus: the Human Papilloma Virus (HPV), which can be transmitted through oral, vaginal, or anal sexual contact. The prevalence of HPV in Latin America and the Caribbean is 16%, the second highest in the world after countries in Sub-Saharan Africa (24%). Fortunately, the risk of HPV infection and the risk of developing this type of cancer can be prevented through a vaccine administered free of charge in Colombia to girls and adolescents between the ages of 9 and 17. However, HPV vaccination coverage in Bogotá is lower than expected, and only 6% of 9-year-old girls in 2019 were fully inoculated with two doses of the HPV vaccine.

To increase the HPV vaccination rate in Bogotá, the Behavioral Economics Group sent text messages with behavioral economics principles to parents of girls between 9 and 17 years, in coordination with the Secretariat of Health of Bogotá, the Ministry of Health of Colombia, the American Cancer Society (ACS), the Liga Colombiana Contra el Cáncer and Universidad del Rosario. The complete intervention targeted a total of 174,181 parents. From that sample, 75% were nudged to vaccinate their daughters for the first time, while the rest were parents of girls and adolescents pending one vaccine who were reminded to complete the entire vaccination scheme of two doses. This project summary presents one out of the six experiments run during the whole project. The intervention took place between October 2021 and December 2021.

Hassle factors/Procrastination:  We frequently do not act on our intentions because of small factors or inconveniences that hinder us or make it uncomfortable to act. These factors could include how the information is presented, its length or that additional actions must be taken to execute a decision. In this population, we do not see an intention problem but an execution problem since parents have already vaccinated their daughters once and need to take them for a second dose. Thus, we hypothesize that hassle factors, like the difficulty of coordinating a time to vaccinate their daughter and the time it takes to find a vaccination point, might lead parents to procrastinate and forget the second vaccine for their daughters.

Reminder: Reminders may consist of an email, text messages, a letter, or a personal visit to remind the person making the decision about some aspect of their intention-action. These are aimed at mitigating procrastination, forgetfulness, and cognitive overload for those who must make decisions. In the interviews we conducted, one of the reasons parents gave for not vaccinating their daughters was forgetfulness. We sent parents reminders to take their daughters to the vaccination center. We believe this was especially important for parents with daughters lacking the second dose since they likely had already overcome other barriers such as lack of information and mistrust before vaccinating their daughter for the first time.

Anchoring: An initial exposure to a certain number or attribute serves as a point of reference and impacts subsequent judgments. We set a time anchor to nudge parents to vaccinate their daughters by telling them a vaccine was waiting for their daughter in the current week; this way we aimed to anchor them to act promptly that week instead of deferring their action.

Implementation intentions: Implementation intentions are if-then plans that spell out in advance how one wants to strive for a set goal. By setting a specific plan for certain behavior people are more likely to follow through. We asked parents to pick a day and time to vaccinate their daughters as a mechanism to get them closer to the action.

Urgency: Given that the negative consequences of not vaccinating daughters against HPV are realized in the long term, the action to take them to the vaccination center can be easily postponed. We created a sense of urgency to help parents take action early by combining the implementation intention with an urgent call to action. Parents were asked to pick a day and time to vaccinate their daughters in the current week.

Active choice: This communication reframes a given default by posing a question related to willingness to take that action and presents different response options to make people reflect on their choice.  We asked parents whether they would take their daughter to get the second vaccine, and we explicitly stated the two possible answers to that question: either yes or no to make them reflect on their choice.

Endowment effect: People place more value on things simply because they possess them. This insight has proven to be effective for administering other vaccines. We told the parents that a vaccine against HPV was waiting for their daughter. This message conveys that not taking their daughter to get vaccinated implies losing something they already have.

The Behavioral Economics Group, in coordination with the Secretariat of Health of Bogotá, The Ministry of Health in Colombia, La Liga Colombiana Contra el Cáncer, the American Cancer Society, and Universidad del Rosario, implemented several SMS experiments designed to increase HPV vaccination rates in Colombia. All the experiments were implemented through a text message campaign (SMS), differing in the behavioral tool used to prepare the message. Our team decided on this channel because the Secretariat of Health of Bogotá had already launched several SMS campaigns in the past. In this summary, we will explain one of those experiments aimed at closing a parent’s intention-action gap. In other words, we assume that the target population of this experiment has already formed the intention to act, but hassle factors have hindered their execution of those intentions.

This experiment targeted parents of girls who had been vaccinated once against HPV but needed the second dose of the vaccine to be fully covered. The number of parents who participated in this experiment was around 28,500. Table 1 shows the message by behavioral design tool used to design each message. 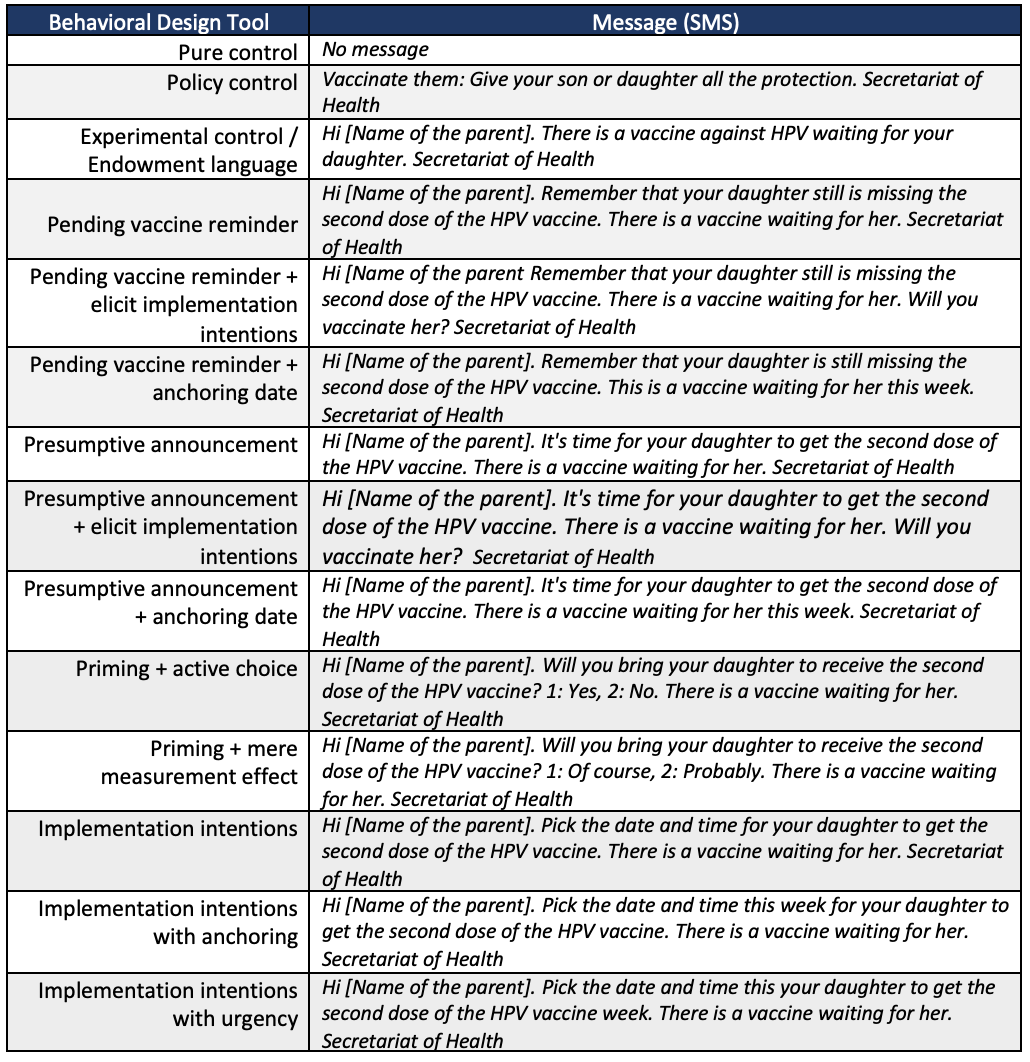 As Table 1 shows, this experiment included eleven treatments designed with behavioral elements and three control groups. The pure control group did not receive any message. The policy control group received the "business as usual" message that the Secretariat of Health of Bogotá was using in communications with the target population. The experimental control group included fixed elements that were incorporated into every treatment. The fixed elements for this informational experiment were a customized greeting with the parent’s name, the Secretary of Health’s signature, and endowment language. The latter communicates that a vaccine is readily available for the person’s daughter, thus, presenting the HPV vaccine as something that the person already owns. Therefore, not vaccinating their daughter implies losing something, which the evidence indicates can be a more powerful driver than the possibility of acquiring something that is not yet theirs—so-called loss aversion. Each treatment tested information combined with the fixed elements in the experimental control.

This experiment aimed to close the intention-action gap mostly in place due to lack of planning, procrastination, or forgetting. We believe that reminding parents about their daughter’s pending vaccine is the most important thing a health institution can do to close that gap. We hypothesized this could make a big difference in follow-through to reach full immunization.

The experiment consisted of sending a weekly text message to the target population’s parents over eight weeks. The content of the message remained constant. The vaccination records of the Secretary of Health are updated daily, and our team received them weekly. This allowed us to remove those parents who had already taken action before sending the following message.

This project had several challenges:

HPV vaccines ran out after week 4 of our intervention in some vaccination centers. We had to stop sending SMS and helped in the coordination between the Ministry of Health and the Secretariat of Health. They quickly responded, and we were able to resume the experiment after pausing it for ten days.

Results indicate that the SMS intervention increased second-dose HPV vaccination rates in Bogotá. We found in this experiment the most impactful message of all of the experiments that we ran in Bogotá.

Figure 1. A simple reminder to vaccinate daughters was the most powerful tool for parents of girls missing the second dose. 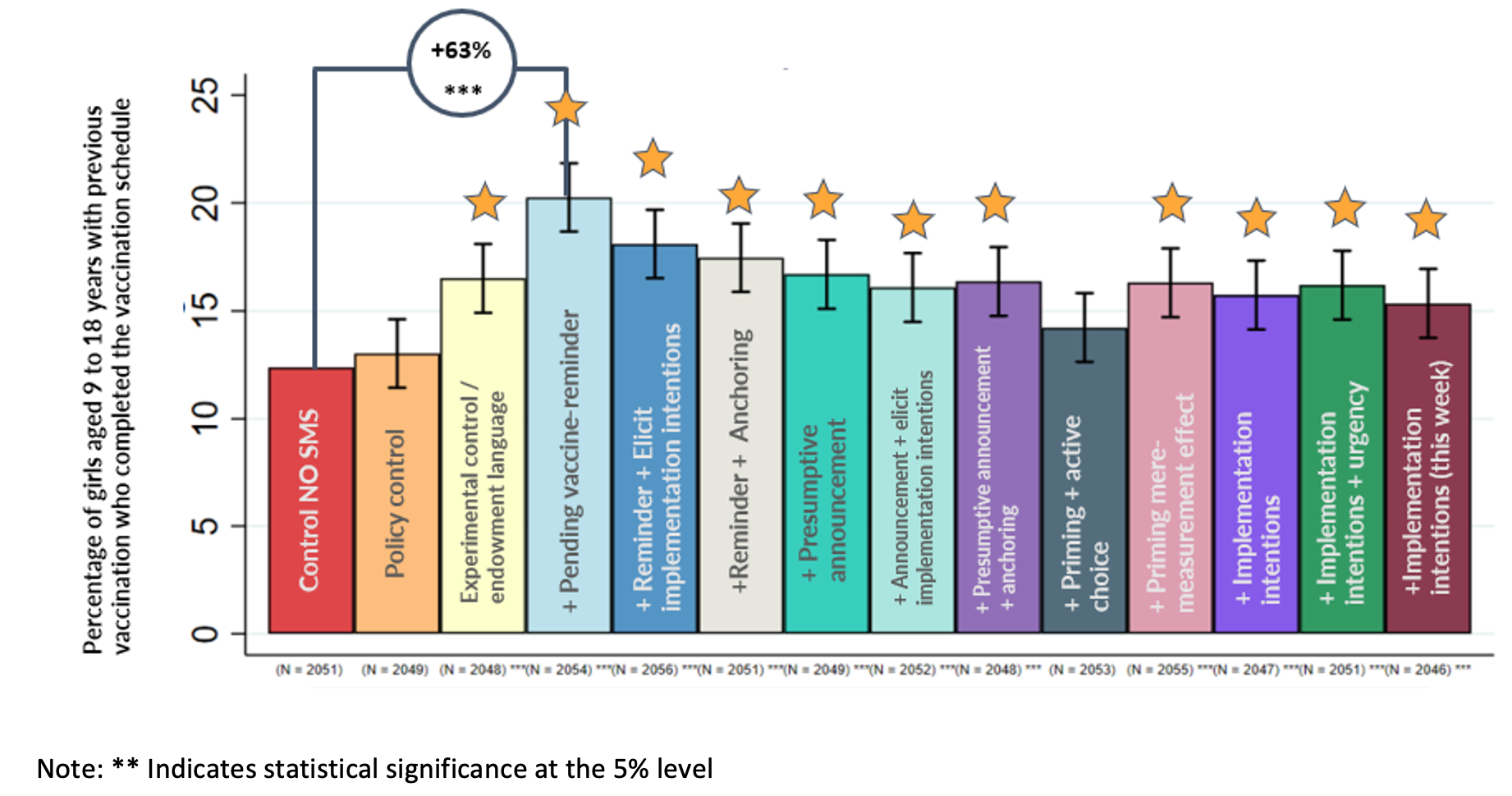